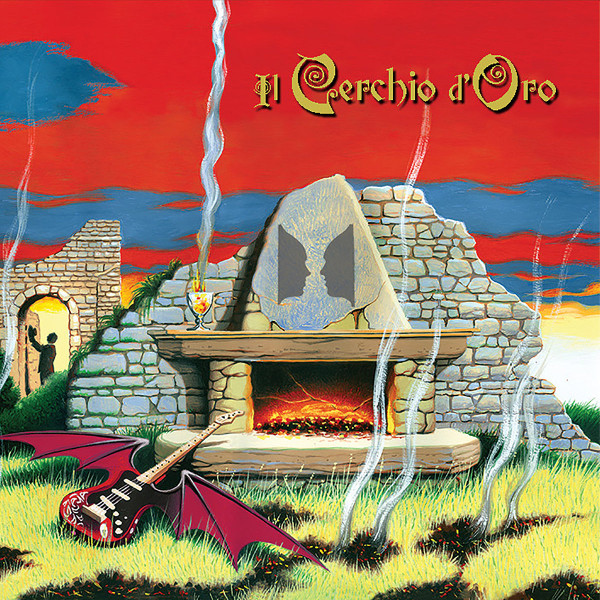 Il Cerchio d’Oro continue their musical journey with another excellent album, Il Fuoco sotto la Cenere (The Fire under the Ashes). The lineup is slightly different from their previous album: Piuccio Pradal (acoustic guitar and vocals), Giuseppe Terribile (bass, guitar, and vocals), Gino Terribile (drums, percussion, and vocals), Massimo Spica (guitar), Franco Piccolini (keyboards), and Simone Piccolini (keyboards and backing vocals). Plus they are joined on a couple of tracks by guest musicians Paolo Siani (Nuovo Idea, Equipe84), Giorgio Usai (Nuovo Idea, New Trolls), and Pino Ballarini (Rovescio della Medaglia). Like its predecessor, Dedalo e Icaro, Il Fuoco sotto la Cenere is a concept album. The seven tracks explore different aspects of living in a world that burns under ashes that frequently erupts with fire and violence. The album opens with the title track and crackling fire. This track is journey into the mind of a person who, like most of us, has to confront everyday problems and in time is no longer able to withhold his anger, inner strength, and anxiety. The second track is “Thomas,” about fire that destroys, but in the end makes it possible to restore life and start on a new path, like a phoenix. The third track, “Per Sempre Qui,” is about a person who spends much of his life far from his homeland and family in exchange for prosperity and well-being. But in the end his desire to return to his origins (his "fire under the ashes”), prevails and pushes him to go back. “Il due Poli” deals with perpetual conflict between “under the ashes” and “fire.” “Il Fuoco nei Bicchiere” is a story of alcohol addiction and the constant struggle to move away from this “fire.” “Il Rock e l’Inferno” explores the dichotomy of rock music being by some as diabolical vs. communicating a mood and youthful exuberance. And the album closes with “Il Fuoco sulla Collina,” a cover of an 80s Italian song by Ivan Graziani. Despite the subject matter, the music is beautiful and melodic, that continues to remind me of Le Orme. There is a ton of great Hammond organ and Mellotron to satisfy your 70s Italian prog cravings.