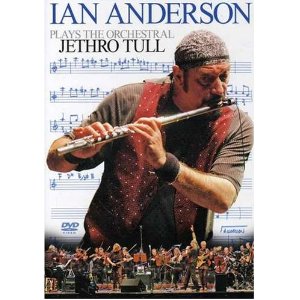 Over the last several years, Ian Anderson has been taking breaks from his regular band work for the occasional solo album and tour. On this occasion, his four-piece backing band is supplemented by a small orchestra. In addition to some classic Tull selections, there are pieces from Anderson’s solo albums and a number of Christmas songs. The arrangements for the orchestra are both tasteful and inventive, treating the instruments with respect and giving them something more to do than play chords behind the band. “Aqualung” in particular gets a great new sound, taking it far astray from its hard rock beginnings. At various times, members of the orchestra get to step out front into the spotlight, most notably a flute duet with Anderson on “Griminelli’s Lament.” While the majority of the music is more or less acoustic, guitarist Florian Opahle gets to show off his rock chops on electric several times. Anderson himself performs quite admirably, with his flute sounding more fluid and nimble than ever, and though his voice may lack a bit of the range he had thirty years ago, he acquits himself well at all turns. The concert footage is augmented by a lengthy (48 minutes!) interview with Anderson in his home studio, covering a wide variety of topics, including some astute observations about the music business and the place of rock in music history. There are also conversations with some of the orchestra players for a little behind-the-scenes look at the show.