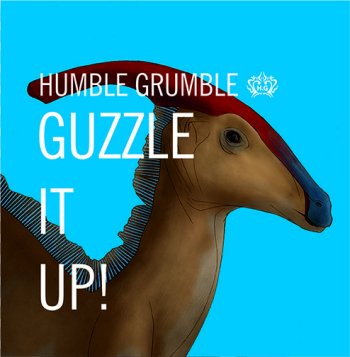 Named for bandleader and guitarist Gabor Humble, this Belgian octet’s second release is a fairly bizarre undertaking, mixing brilliant playing, off-kilter arrangements, and goofy, sometimes troubling lyrics into a sort-of euro-folk based strange stew informed by jazz, rock, Zappa-esque elements, and a number of other things that never quite mesh together smoothly, but still make for an interesting and unique listen. Humble, who is also the main songwriter and singer, is joined by two dedicated female vocalists, and five other players that cover bass clarinet, saxophones, bass, keyboards, vibraphone, drums and percussion. The primary role for woodwinds and vibraphone give their sound a unique jazzy contour that, when applied to the folky core, makes for some pretty unusual sounds that are like no other bands I can think of right off hand. “The Dancing Dinosaur” even has some country-ish moments that mix in, while some of the other cuts seem to have bits of klezmer and polka popping up here and there. The vocal power presented by the three singers is mighty impressive, yet the lyrics will just leave you scratching your head in bewilderment. Even though this basket full of seemingly random styles never really blends that smoothly across these seven tracks, the caliber of the musicianship throughout is amazing, and adventurous listeners will find plenty here to enjoy.

When You're on Your Way to Hell...