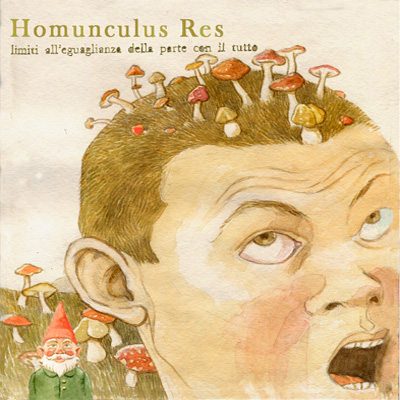 Any disc with a cover this strange will get my attention immediately. And in this case the attention is well deserved, as this is one of the finest and most captivating releases of the Italian scene in recent memory. This is a new band from Palermo, a seven-piece with guests, featuring catchy but complex compositions with clever arrangements and beguiling vocal harmonies, on their very first release. Even on the very first play it’s one that will have you hitting the replay button immediately after, but subsequent listens reveal even more about it that just continues to draw you in. Some of the vocals, though they are in Italian, recall Robert Wyatt on those early Soft Machine albums, and throughout – even though this is contemporary, there are 60s British undertones that inform much of this. With creative and ingenious determination, the arrangements tend to be happy-go-lucky, cheerful, and all over the complexity grid. Parts of this will certainly recall Caravan from the early 70s, but not in a derivative way, just fellow travelers on similar parallel paths from different decades. Most of the songs are short and to the point – they have to be, there are 18 of them in all, and even the shortest ones count. There’s no filler to be found anywhere. Instrumentation-wise, we have two guitars, piano, two or more keyboardists playing mostly analog gear, drums, bass, flute, plus extras, with vocals shared by several members. Have to say, this is one that keeps me smiling, I just want to keep playing it over and over!