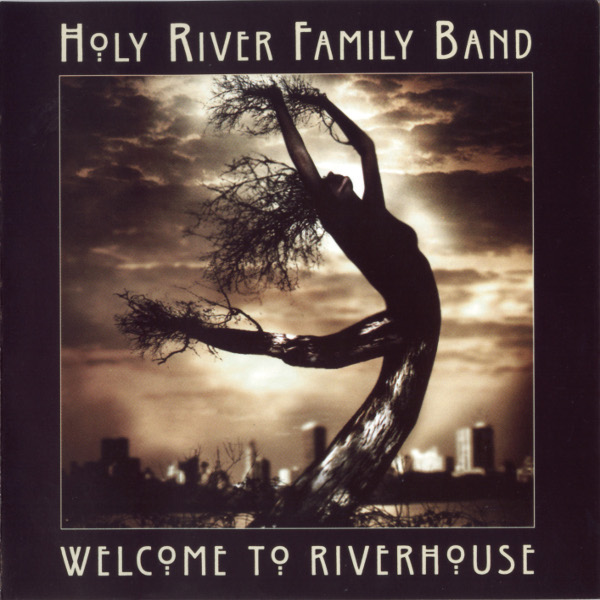 The Scandinavian psych scene seems to be alive and well as the end of the millennium approaches. Tangle Edge is back in business, Spacious Mind has a new one on the way, the Kundalini album is turning heads, and Holy River Family Band is back with a second album. The trio of Jens (keys and vocals, also a member of Spacious Mind), Arne (guitars, sitar, saz, bouzouki, violin, etc. and vocals), and Mathias (drums, acoustic guitar, cello, flute, percussion, etc.) have produced an album of drifty psych that is light years ahead of their first effort, which in itself was a pretty impressive effort, and significant in the grand scheme of things in that it led them to the present. Riverhouse is rich in psychedelic content, superbly composed with sort of a loose jammy feel, liberal use of sitar, saz, ney, and other eastern and middle eastern instrumentation, shimmering early-floydish organ and echoey guitars, and plenty of hand drums to give it sort of a hypnotic 60s-meets-90s effect. Arne’s vocals (he leads on a good percentage of the tunes) sound an odd bit like the guy from Simple Minds, a strong tenor that suits the temperament of their music quite well. The fact that the other guys do sing lead (and there are a fair number of instrumentals too) gives the album a sense of variety that works to its credit. Some of the tunes (like the eleven minute “After Chacruna”) utilize a massed choir effect that works well to underline the dynamic extremes the band operates within. The violin solo with wah-wah on the very first track, “Peyote Visions,” is a definite consciousness-raiser as well. The album comprises two full discs, totaling nearly two hours of music — in fact this writer finds the excessive length to be its only fault, better take it a disc at a time — absorb disc one completely before starting on disc two. Overall, a simmering, shimmering psychedelic gem.