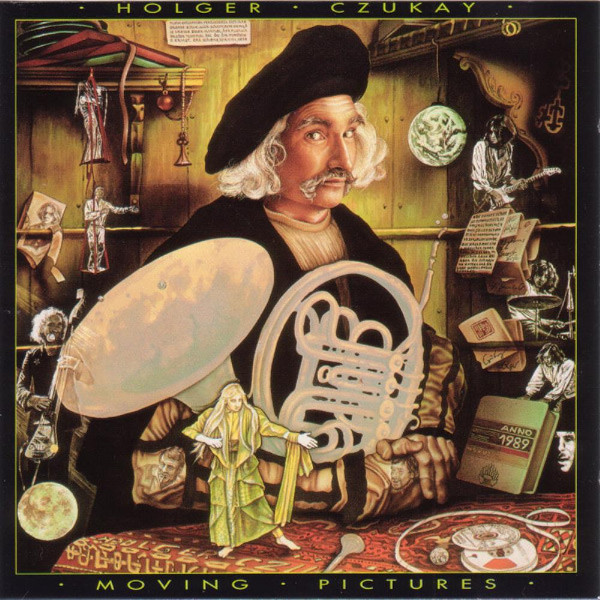 If Holger Czukay continues to bring forth projects of the caliber achieved here, he will continue to keep my attention. For Moving Pictures is much more delicate on the sensitive ear than anything I have heard by Can. The uninitiated may prefer to use Hassell and Eno's Fourth World, or the Bush of Ghosts material as reference points. Like the former, Czukay stresses the atmospheric instead of the groove-oriented element. And where Eno looked to Africa (on the latter recording), the Stockhausen disciple uses Indian music as source material. Lest we forget that Czukay has been in this game ever since his experimental work with short-wave radio in the 60s that led to the Canaxis LP. It is a pedigree as such that allows the master of instrumental disguise to wear a different musical wardrobe than the many sugar-coated manifestations like Sheila Chandra, et al.

Much of Moving Pictures paints itself surrounded in a droning mood, backed by with simple drum patterns. "Drak Moon" and "Rhythms of a Simple Life" both portray this barren, darker side. Mention must be made of "All Night Long" though, wherein very clever samples of footsteps play the role of rhythm section — the underlying instrumentation is also astounding — see how he uses bass guitar to emulate a gong. "Longing for Daydreams" flips the coin over for a beautiful soundscape where female voice adds the spice of ethnicity. In keeping with the title, this work hits you with an almost consciously filmic composing method, in that there is a clear foreground and background. On the down side he tends to tramp off course where vocals are concerned. Two spots in particular are bespoiled by a Lou Reed vocal imitation that made no sense in relation to its surrounding context. Other than that, Czukay attempts no shrouding of his cross-cultural appropriations in promo-friendly formats. And while Moving Pictures may not be as consistently on the mark as his unforgettable Plight and Premonition, this scenic aural travelog nevertheless reveals its own magic.