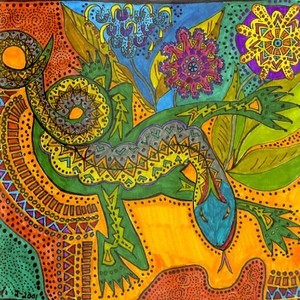 Californian Herbie Kritzer is clearly someone who enjoys having fun with music. Even his name sounds a bit cartoon-ish, and there’s certainly a streak of sly wit and boy-ish playfulness to many of these eight jazz instrumentals. Kritzer’s main instrument is the piano, through he proves himself equally adept on drums and vibes. What’s even more impressive is how seamlessly the parts are melded together on the album: I could swear I was listening to a small combo playing, not just one guy. Known also as a Stick player (though he was also once drummer of an outfit called Tokyo Sex Whale!), Kritzer’s piano playing is impressive, demonstrating a light yet nimble touch and impressive fluidity when it comes to harmonic extensions. Some pieces even develop a harmonic depth that recalls Erik Satie, best seen in “No Friends.” Elsewhere he imbues the compositions with a springy rhythmic bounce (“Tree Lizard,” “Corn Ball”) or a sly, feline saunter (“Vashon Scratch,” “Tree Lizard Betrayed”) that even hint at Dave Brubeck’s creativity with melodic figures. Dashes of blues make their way into the pieces as well, so as you can imagine the album is really a varied experience, though all well within what one would expect from a small pocket jazz trio. I’d encourage the jazzers out there to track this one down, even though it’s very much an independent effort and probably hard to find. My only complaint with the album is its length, a mere 28 plus minutes. Gimme more, Herbie!