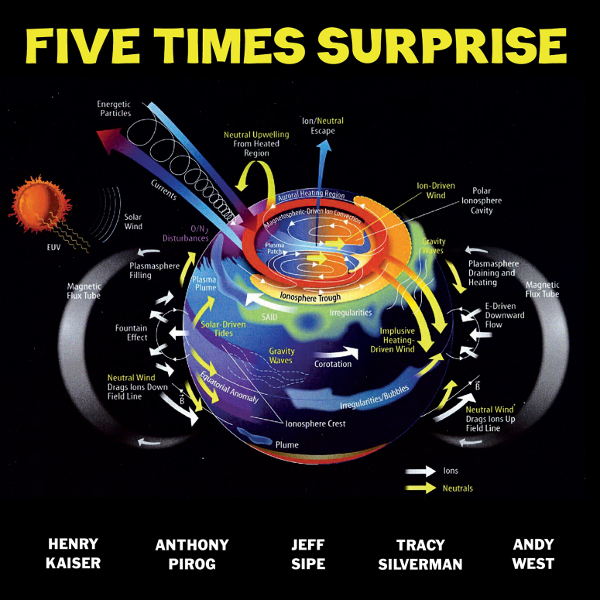 Among the many ways to categorize music is the axis from strictly composed to freely improvised, which has the advantage of being completely objective. A listener can subjectively say they prefer music that fits in a particular range along that scale, but the scale itself is not based on judgment. Personally, I regard the composed vs improvised score of any particular music to be non-indicative of quality or enjoyability, but I know some people favor one side over the other. Five Times Surprise leans heavily towards the improvised end of that continuum, and the imagination and creativity of the players makes it an almost constant joy to hear. For many of us, the list of names on the cover leads to high hopes: Henry Kaiser, Anthony Pirog, Jeff Sipe, Tracy Silverman, and Andy West. They do not disappoint. Kaiser and Pirog are guitarists who have given us a lot of great music in the past, and neither is a member of an established tradition such as metal shredding, Guitar Craft, or classic jazz. Tracy Silverman, in addition to being a member of the Turtle Island String Quartet, works in a jazz outfit called Nashville Electric and has played music ranging from pop to avant-garde. Bassist Andy West comes to us from Dixie Dregs, The Mistakes, Crazy Backwards Alphabet, and much more. On drums there’s Jeff Sipe, a veteran of Leftover Salmon, the Aquarium Rescue Unit, and much more. Aside from the Mahavishnu Orchestra classic “You Know You Know,” the tracks are all credited to the group, and generally feature a loose framework used as a springboard for spirited jamming. The cuts range in length from under two minutes to nearly 13, and then there’s “Twilight of the Space Gods,” a massive 40-minute piece that takes up the entire second CD of the 2CD version of the album. It seems pointless to try listing highlights, as every track has its own appeal, with moods ranging from eerie ambience to all-out energy. This is about as far from aimless noodling as you can get, full of appealing insanity.