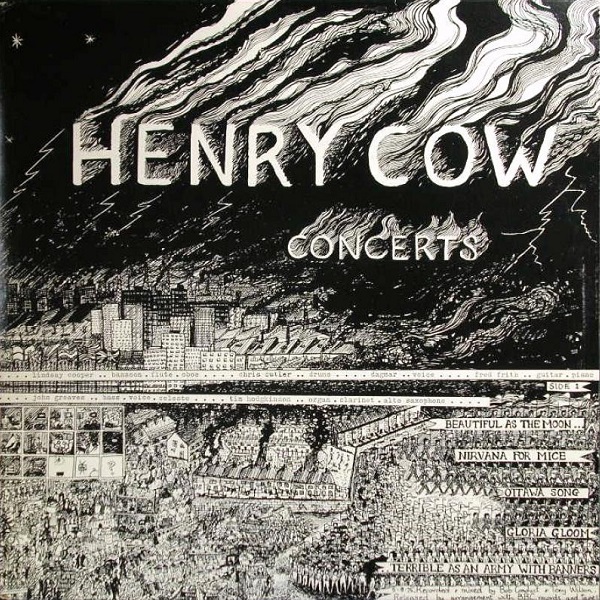 Another Henry Cow re-release which has much more information in the expanded liner notes which detail the proceedings. The first four tracks were taken from a 1975 BBC Peel Session and features a track from Matching Mole's second album ("Gloria Gloom"). The songs were run together from start to finish, no separations. Also included is a short interview with the band from 1977 which reviews the contents of this disc and has an extract from the band diaries of the time period. I love the name of the one of the opening acts on the tour: Suck Electronic Encyclopedaic. Whatever happened to these guys? Do we really want to know? Band food has always been marginal to speak of, but does anyone know what cabbage glup is? How can anyone eat anything that sounds like that and still make music? Also a neat little forgery story to amuse. In addition, there are four new tracks which are included from the original line-up in 1973 with Geoff Leigh on saxes: again mostly improvised work. Frith uses an avant-garde guitar playing technique reminiscent of his work on his Solos disk for "Cafe Royal": very weird. The medley that starts with "Beautiful as the Moon; Terrible as an Army with Banners" presents some of the best work of the band with Dagmar, and "Bad Alchemy/Little Red Robin Hood Hits the Road" features Robert Wyatt as guest artist on vocals. This was taken from a show in 1975 and is a pretty live version of the song. The second disc is a combination of jazz, percussion and noise. Very hard to get into, prone to creating migraines (at least for me), but a great annoying live forum for you budding noise musicians to analyze!