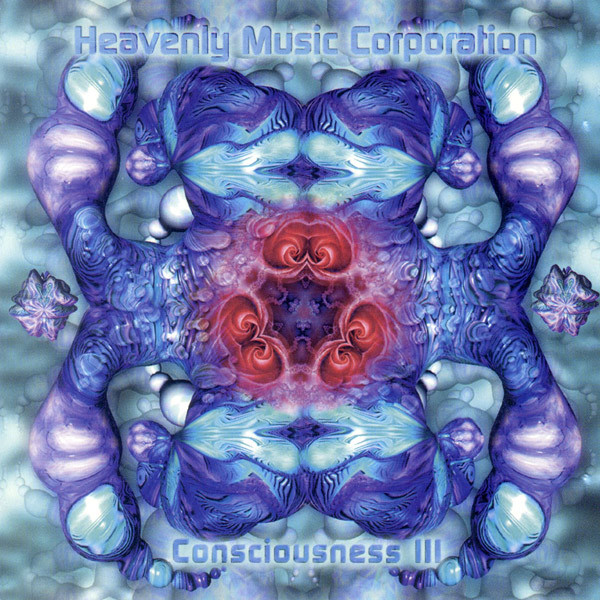 Those of you long in the tooth might well think that the Heavenly Music Corporation is Robert Fripp and Brian Eno together again. How wrong you would be! The Heavenly Music Corporation is the solo effort of Silent’s president Kim Cascone. Consciousness III, released late in 1994, is Kim’s latest excursion into the realm of ambient electronic soundscapes. What Kim has achieved on this disk is a marriage of 90s trance with 70s Teutonic cosmic music. From the opening beat to the last note, Kim takes you on a strange and wonderful journey through eight altered neural states. As this tour commences you are adrift in the North Sea surrounded by ice with only a beacon light to guide you home to "Flowers and Beads." Chilly liquid sounds and a relentless rhythm machine are your only companions. Next is the title track, a meditative trance inducing piece with echoed female laughter much like Rosi Muller on Ash Ra’s "Laughter Loving." After falling under the spell of this woman’s voice, I found myself visualizing Southern Louisiana, Spanish moss, old plantations, lush vegetation, and filtered sunlight. This bucolic setting for "Innerdimensional" is further enhanced by the ghostlike voice of a little girl, Kim’s daughter Francesca. The low point for me was "Crystalline Entity." Its electronic rhythms and bass left me flat. But the music only gets better from this point. "Cloud Chamber" is another virtual visual experience. You can “see” the swirling water vapor as it saturates your hair and clothes while you drift into oblivion. The next two tracks, "Dolphin Pod" and "Sunfish=Starflower," both deal with the ocean from different perspectives and they also contain some elements of Ralph Lundsten’s pioneering electronic work. Consciousness III closes with "Riding Windhorse," a beautiful ambient piece that recalls those halcyon Spring afternoons of my youth. The electronic birds are simply exquisite! Consciousness III is a wonderful and relaxing experience, definitely not one to miss this time around.