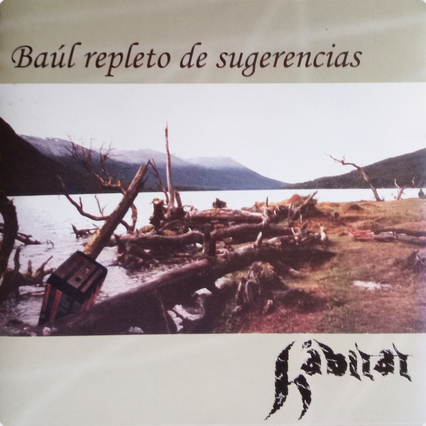 Hábitat is the Argentine duet of Aldo Pinelli (vocals, bass, guitars, percussion) and Sergio Raffaghello (keyboards), with the assistance of Enrique Hittos (guitars, keys), Roberto Sambrizzi (drums, percussion), and Pablo Torres (drums). There are five ensemble compositions among Baúl Repleto de Sugerencias’s ten tracks. At their most conventional, these pieces, which range from three to eight minutes, sound like soft rock or mellow neo-prog. On the more ambitious songs, however, the laid-back mixture of electric and acoustic instruments, softly sung vocals, and restrained solos is evocative of the gentler, dreamier side of 70s symphonic rock. I found myself vaguely reminded of Celeste and Pulsar during “Luz de Vida,” in spite of the absence of Mellotron. The CD also includes the delicate classical guitar solo, “Hay otoño en el aire” (of which there is also a variant “ambient” version), a second ambient piece, a live unplugged version of “Erosionado,” and a snippet from a 1997 Spanish-language TV interview. Not having heard their first album, Historias Olvidadas (1997), I can’t say how Hábitat’s sound has evolved since then. What I can say, though, is that Baúl Repleto de Sugerencias should appeal to readers who like quiet, gentle, melodic music with a symphonic drift and ambient leanings, although folks uninterested in interviews or in multiple versions of the same song could be disappointed that there isn’t a bit more material here.