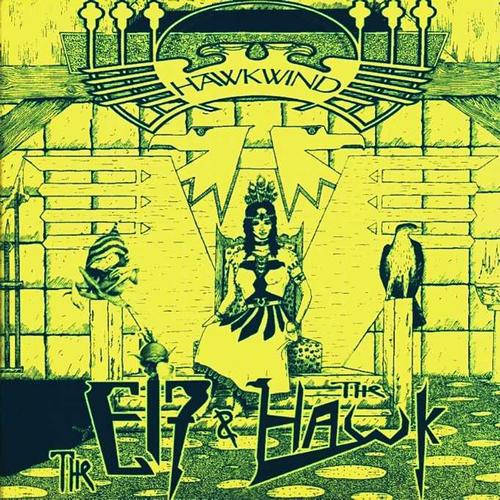 This is a must have, Hawkfans. The Elf & the Hawk is a reissue of Brian Tawn’s fanzine Hawkfan (No. 12 to be precise) from 1986 plus a few bonus tracks. Hawkfan is the Hawkwind newsletter, and Brian wanted to do something different for issue 12, so he originally pressed it to vinyl. Sadly, the CD doesn’t display the vinyl’s excellent Bill Jones artwork, but it is fantastic. The LP consisted of seven tracks: Hawkwind performing new pieces “Ejection” and “Ghost Dance”; some “Friends and Relations” type bands; the tasty synthesizer of Bill Jones’ (yes, the cover artist) Dark Empire project on “The Human Race”; a killer psych guitar jam by Syndrone called “Synprovisation”; cult favorite Underground Zero’s Aimless Flight (one of their best); and the only opportunity to hear the demo recordings done by Michael Moorcock for his “Entropy Tango.” I was surprised at how good this track is, and there’s some great jamming by a mystery guitarist.

Newly added for this Black Widow release are “Burn Me Up” by Dave Brock and a Phil Howard (Spacehead) cover of “Spirit of the Age.” The real highlight here is the inclusion of Alan Davey’s EP from 1987 called “The Elf”-excellent! Playing all the instruments, Alan creates a sound highly reminiscent of Hawkwind incorporating a thundering bass line and a psych guitar wailing on top. Even the drum machine is done well. You can see why Dave Brock wanted this guy in the band. Tawn included this EP on the reissue CD as a way to let Hawkfans know this guy was the real deal. Kudos to Black Widow for making this available again. Highest recommendation.