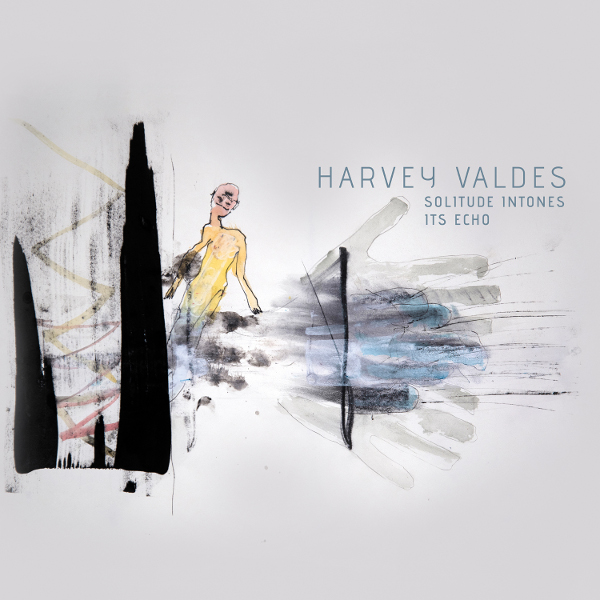 I first encountered guitarist Harvey Valdes with his trio, which features violin and drums and plays his inventive compositions. With Solitude Intones Its Echo, we get a 38 minute set of Valdes on his own, presenting completely improvised pieces. He’s playing an electric guitar but doesn’t indulge in effects, and there are only slight differences in tone between the 18 short pieces. For the most part, the pieces don’t sound especially like jazz, having more of a modern classical feeling about them, with complex finger-picking and densely voiced chords. These pieces do not consist of lead lines backed by chording, but are spontaneously created works that could stand on their own as compositions if transcribed. Valdes works in melodic lines among the chord notes, using his fingers to bring in harmonic complements to his lines. I think most guitarists would be quite pleased to be able to play these pieces, let alone being able to improvise them. Overall, I’d say the mood is contemplative, for while some of the pieces are energetic, they’re never aggressive or strident. Even “Excavation,” which is the most dissonant piece in the set, doesn’t sound harsh in spite of all its extensive use of whole and half step intervals. I would describe the music as having ambiguous and shifting tonalities rather than being atonal. Certainly anyone who is a fan of solo guitar should check out Valdes’ work, and Solitude Intones Its Echo is quite impressive without being flashy or show-offy.

Wendy Carlos - Switched-On Bach & The Well-Tempered Synthesizer – Given the limitations of the synthesizers available in 1968, the choice of Bach as a focus for Wendy Carlos’s pioneering recordings makes perfect sense: the instruments could play only one note...  (2002) » Read more