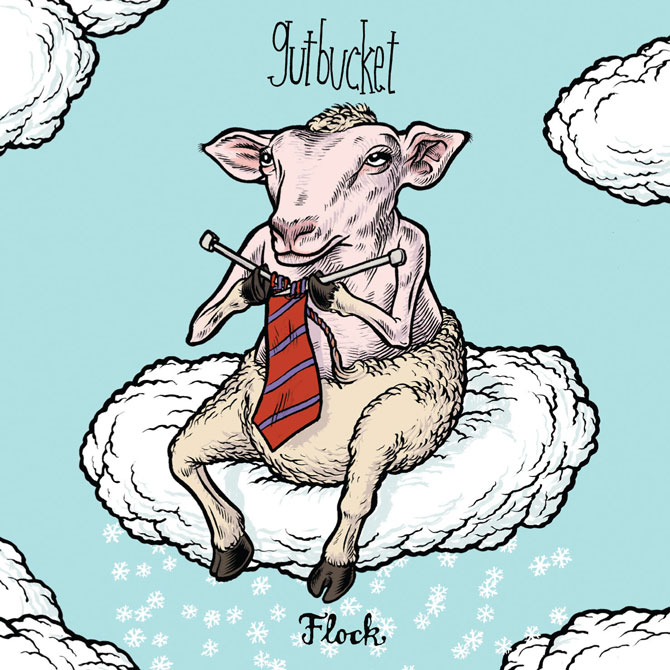 Gutbucket has been around for about 12 years and Flock is their sixth release of indie, math rock, and jazz music. The four members Ty Citerman (electric guitar), Eric Rockwin (electric upright bass), Ken Thomson (saxophone), and Adam D. Gold (drums) play rhythmically complex jazz-rock music with extended dissonant chords. You can easily detect the influence of Robert Fripp in their approach. Most of the 11 tracks are aggressive compositions that will take a dedicated listener to make it through the entire disc. There are so many things going on at different levels, each musician is exploring a different path that is all somehow coordinated. At times you can even detect something that resembles a melody. In addition to the odd time signatures, there are odd ball song titles, for example "d0g Help Us," "Zero Is Short for Idiot," and "Said the Trapeze to Gravity (Why Are You So Old?)." These titles do seem a bit contrived and do not appear to correlate in any obvious way with the music. The coolest thing about this release is the cover art of a sheep sitting on a cloud and knitting a club tie from its own fleece. But I am not sure how that relates to the music either. Probably the best music on the disc is the three-part "Born Again Atheist Suite." This suite, for me, is the most approachable of the set and worth the price of the disc.

I saw Gutbucket play much of this material live before I heard the CD. The band is pretty impressive live, with all the music's crazy twists and turns executed with seamless skill and great energy. For the studio versions of the tunes, the performances are a bit more precise and varied, but still energetic. Though without the visual element of sax player Ken Thomson bouncing around the stage like a subatomic particle subject to magnetic forces unseen to human eyes. The music fits in that odd spot where it's maybe not jazz, but also not not jazz. Which makes it jazz in my book, since I'm not a purist. Aside from Thomson's acrobatic saxes, it's Ty Citerman's guitar that stands out, and is really the wild card in their deck - he favors dissonance over anything you might find on a chord chart. Gutbucket is not as abrasive to my ears as some of John Zorn's work, but they're definitely in the same ballpark. The sax melodies even have a klezmer-like quality to them at times. One of my favorite moments is when the lunatic stuttering rhythms of "d0g Help Us" give way to the long cathartic tones of "Murakami." That's a sweet bit of programming there, providing some balance between poles that are widely separated. Another big difference this recording has from the live show is the use of expanded instrumentation. Thomson handles nearly every variety of saxophone and clarinet possible, and bassist Eric Rockwin adds touches of cello and keyboards from time to time; drummer Adam Gold also contributes some electric piano. All in all, an outstanding release, though probably not to everyone's taste.