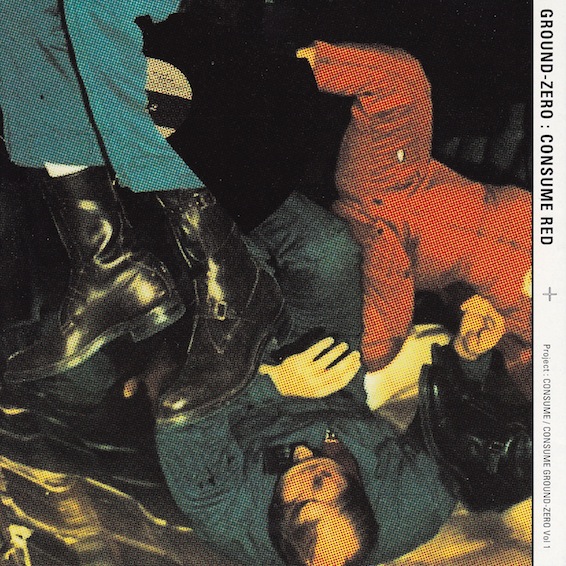 One could say without stretching the truth too far, that Consume Red (part one of the three part Project Consume) is basically an hour of pure thrash / noise experimentation, delivered piping hot by this Japanese eight piece ensemble featuring turntable terrorist Otomo Yoshihide, and seven others playing bass, guitars, samplers, drums, samisen, soprano sax, and a few other things. No vocals (other than an occasional voice sample) or keyboards so far as these ears can tell. Two saxes play off one another in free space for the first five minutes or so before the noise contingent starts to kick in, with the samisen joining at about the ten minute mark, adding a touch of Japanese tradition. The most brutal, distorted and ugly noise outbursts are injected at first only sporadically, but eventually more frequently, destroying nearly everything in their path. Around the 25 minute mark the double drums, samplers, noise bursts, turntables, another sax and general damnation and chaos all cut loose at once burying everything else that was before. It's shocking, stunning, anarchic, and mysteriously intriguing, but definitely not for the faint hearted. Eventually the drums find a groove and thrash away together under the general cacophony for the duration, even with some apparent chord changes, with more layers of sound being added with each passing minute. Things are slow developing, maybe a little too slow at times, but nonetheless this – while not so 'musical' in any traditional sense of composition, arrangement or development – is an interesting and fascinating listen.