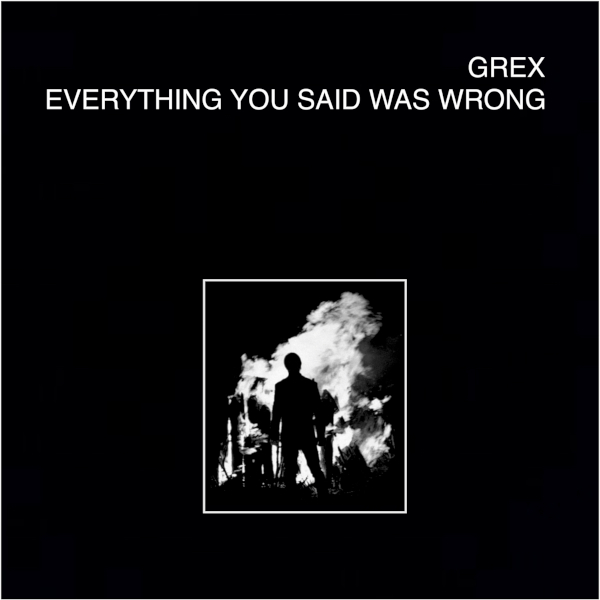 Maybe it’s the enforced confinement brought on by the coronavirus pandemic, but it seems that many musicians are using the “alone time” to explore their art in ways that they hadn’t before. Grex has always been a quirky and experimental band with a broad palette of stylistic influences, but with Everything You Said Was Wrong they’ve moved even further into their brand of alt-rock noise-jazz — it’s the kind of music that invites one to invent seemingly self-contradictory descriptive phrases. This outing finds Karl Evangelista and M. Rei Scampavia handling all voices and instruments on most of the tracks, with drums and percussion from Robert Lopez or Nava Dunkelman (who is also in IMA) on a few tracks. These intense tracks often feature off-kilter drum patterns (both played and programmed) backing unpredictable music with avant-garde guitar parts and sparse synths; Evangelista’s vocals are often spat out in poetry-slam-meets-rap fashion, and Scampavia’s soft melodic voice provides contrast as well as accessibility. Some tracks feature one or the other on vocals, and some feature both. Undercurrents of experimental jazz are everywhere, and there’s even a track called “Walking Ayler in Tarzana,” which is a lovely instrumental with some of Evantelista’s jazziest (in a straight sense) playing. The opening track, “KD,” kicks things off with an energetic upright bass riff and almost free-jazz drumming, intense spoken word, and dissonant notes from keyboards and guitar leading into a ragged unison melody between guitar and keys that gradually devolves into chaos. It’s a great track, and sets the stage for what’s to come. “The Other Mouses” presents another side to the album’s sound, with an insistent drum machine part, ominous chords, and a pretty vocal from Scampavia. And while some tracks have less aggressive sounds, there’s always a sense of chaos under the surface, with odd noises, feedback, and distortion. Lyrics like “Justice is reviled because it is for sale” tell you that social issues are very much on their minds, and it’s not all peace and love in their world. “Jin’s Run,” one of the tracks with Dunkelman, is a wild instrumental that sounds like free improvisation with a penchant for distorted dissonance. The album proper finishes with “Ikki,” a relatively quiet song with guitar that sounds like Bill Frisell in a confused state of mind, stuttery drum machine, and a recurring melody that provides a kind of peace after all the conflict, though it’s far from pretty in a conventional sense. There are a further five tracks grouped as an EP called Everything Stays, which departs somewhat from the style of the previous songs, but remains excellent. And in a way, Everything Stays, being positioned after the litany of problems presented in Everything You Said Was Wrong, provides a note of hope, or at least perseverance.