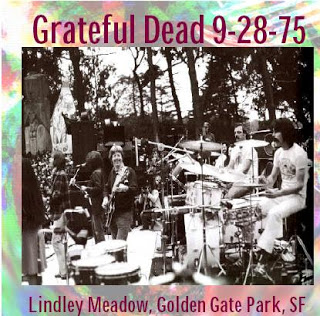 As I was playing this again this morning, my coworker came around the corner during the absolutely blazing version of "Truckin'" that starts the second of the two discs of this show and asked me who was playing the guitar on this. "Jerry Garcia," I said and he expressed his appreciation of his playing because it was indeed remarkable — when Jerry was on fire there aren't really any better players. This show was one of the few during the Dead's hiatus in 1975 and I'm not sure why it's different but there was a little bit more of a fuzz on Garcia's guitar on this show and it gives the whole set a bit of an unusual feel to it. They were really feeling it and with songs like "Help on the Way" > "Slipknot," "Franklin's Tower," and of course the previous mentioned CD-long suite starting with "Truckin'" this is as good as it gets. In fact when the Dead announced their massive, now appreciated, bank-breaking 30th anniversary box, I was just about to pass until I saw this one was on the list, as it was already a huge favorite of mine. Which is a good thing as while I knew this show was good, I didn't realize all the other ones were that good as well. I'm sure this one can still be found pretty easily on the trading circuit or maybe Archive.org. It's just another bit of evidence of how great this group was. And that's the last one for this tier, although to be fair, I'd move this up to the second one at this point.