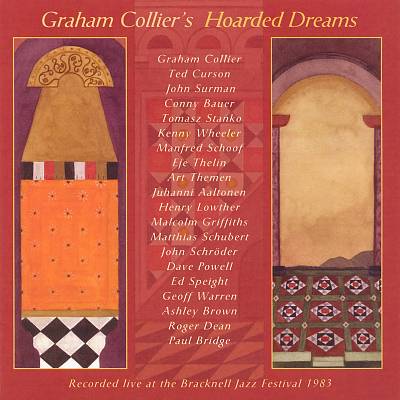 On a purely practical level, this release is hard to categorize. It is the first wide appearance of a performance from the Bracknell Jazz Festival in 1983, so it is both a new release and an archival recording. Collier was commissioned to write an extended piece and allowed to pick any musicians he wanted, and the result was a 19-piece band that’s not much like a traditional jazz big band, though the music is undoubtedly jazz. Five winds (saxes, flutes, and clarinets of various sizes), five trumpet/flugelhorns, three trombones, a tuba, two guitars, piano, bass, and drums follow Collier’s direction through various sections of composition and improvisation. While some sections are very free, featuring improvisation of three or four players at once, there’s enough coherence to keep it from wandering off into chaotic self-indulgence. Given the fact that this was not a standing ensemble, but a collection of people brought together for one performance, the amount of cohesion is simply astounding, giving eloquent testament to the intuitive talents of all. I didn’t do an actual tally, but it seems that each player gets at least one spotlight moment. Collier’s writing is spot on at each turn, with contrasting sections, driving grooves, reflective interludes, tasty ensemble bits, and interesting combinations of elements. I hope all those in the audience were aware of what a special event they were part of, and while I don’t know what kept this one in the vaults for so long, I’m glad it’s out now.