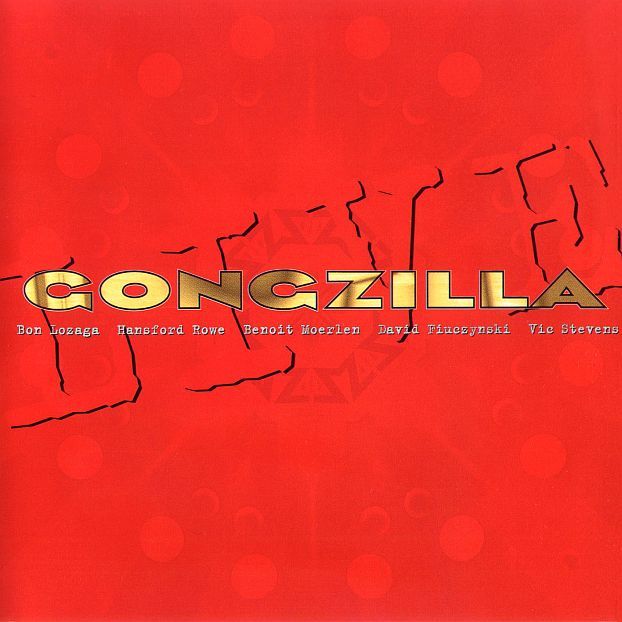 Musically, Gongzilla is the branch of the Gong family tree which favors instrumental fusion with heavy guitar and vibraphone. Historically, Gongzilla is the descendent of Pierre Merlin’s Gong from Time Is the Key. The core of the band is bassist Hansford Rowe, vibist Benoît Moerlin, and guitarist Bon Lozaga; for this live show in Québec City on 28 June 1998, the trio were augmented by drummer Vic Stevens and second guitarist David Fiuczynski. The general idea to Gongzilla is a tight rhythm laid down by Rowe and Stevens, wild leads from the two guitarists, and accents from the vibes. When a band features two players like Lozaga and Fiuczynski, you can only try to remember not to drool – I just wish I could tell the two apart, but I’m not familiar enough with the individual styles to identify them. Sounds vary from fluid Holdsworth-like melodies to Belew-like noises to DiMeola-like speed-picking, all sounding original rather than derivative. Moerlin gets a few moments to shine in the midst of all the six-string pyrotechnics, and perhaps it is his presence that saves the whole thing from coming off as overkill. As it is, I enjoy Gongzilla immensely. It’s a joy to hear such proficient musicians show off their chops without being overwhelmed by egotistic wankery. They’re obviously having a great time playing, and that feeling comes through manifestly. This is easily one of the top fusion releases in recent memory.