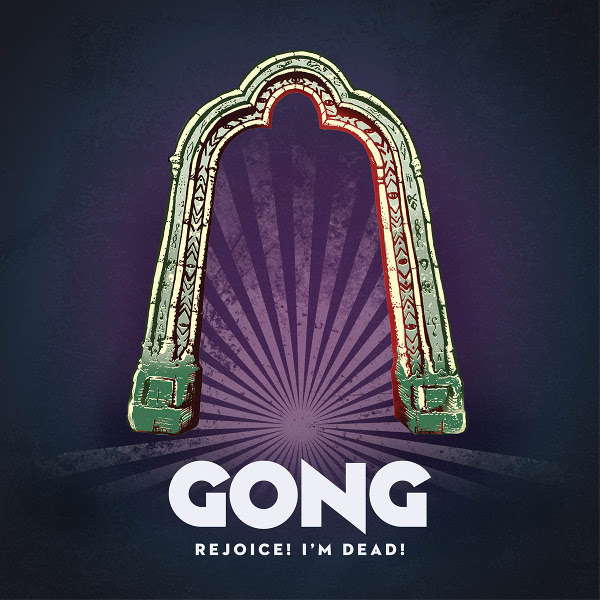 With the passing of the Pot Head Pixie Daevid Allen in March 2015, it at first seemed doubtful that Gong would continue. But as the Gong family constantly fractured, reformed, and assumed new shapes since its inception at the end of the 60s, the new Gong lineup on 2014’s I See You, with Daevid’s urging during his final days, reluctantly decided to carry on. The result is Rejoice! I’m Dead!, scheduled for release on September 16, 2016. Given the uneven I See You and the absence of Daevid from the band, I was uncertain what to expect from this new Gong incarnation. Rejoice! I’m Dead! came together over a few weeks in an East London rehearsal studio where the band experimented with new ideas that evolved into the nine songs on the album, a truly collaborative affair between Kavus Tobabi (vocals and guitar), Fabio Golfetti (guitar and vocals), Dave Strut (bass and vocals), Ian East (sax and flute), and newcomer Cheb Nettles (drums and vocals). The first thing that you notice is the absence of the usual Gong pseudonyms for each musician. The second is the music. Though there are definite Gong elements throughout, other influences and ideas have crept into the mix. To help anchor the music, Gong alumni Steve Hillage, Didier Malherbe, and Graham Clark appear on several songs. Taken on its own, without referencing the Gong legacy, Rejoice! I’m Dead! is a great album. Depending on how you count the Gong discography, this is the 28th album, which some liken to a continuation of the “Virgin trilogy,” but many Gong fans may be put off. To my ears, the best tracks are “Rejoice!” the elegy to Daevid Allen, the atmospheric “Visions,” the mostly instrumental “The Unspeakable Stands Revealed,” and the trancelike “Through Restless Seas I Come.” There is also an early lo fi song idea, “Beatrix,” with Daevid speaking in French. So, approach Rejoice! I’m Dead! with an open mind, check your Gong expectations at the door, and you won’t be disappointed.