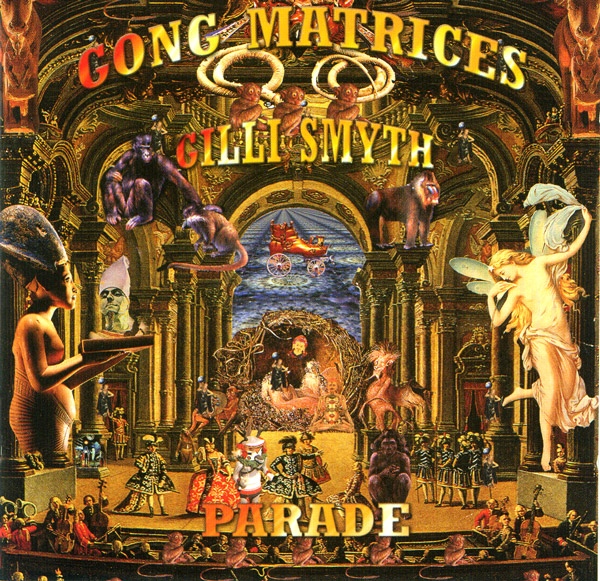 For many of us who attended the IPMF in San Francisco in 1999, the long wait in the lobby while Porcupine Tree had ‘technical difficulties’ was rewarded with the unique spectacle of Gilli Smyth jamming with a group of unknown musicians playing violin, tamboura, hand drums and other percussives – and when Gilli’s set was finished some additional musicians and a vocalist were brought in. Indeed this was our introduction to Azigza. From that point Azigza came unto its own, and has since released two full length discs (and hopefully more to come), but in 2004 bassist Pierce McDowell regrouped all the members of that 1999 jam session (including guitarist James Rotondi and two other members of Azigza) as a backing band for Gilli’s lyrical musings and space vocals, which is documented here on Parade. The backing tracks consist mainly of free droning spacy expanses, or rhythm-driven trance workouts with rock flourishes; in every case it’s appropriate support for whatever Gilli’s lyrics happen to be focusing on at the moment, be it space aliens, parallel universes, wars, virtual lovers, how to send an email to god, the poignant “Demon Barbie and the Super Computer Matrix,” and more. Gilli’s improvisational whisperings also provide outstanding support for the musicians whenever they drift off into instrumental flights, the end result being both introspective and captivating.