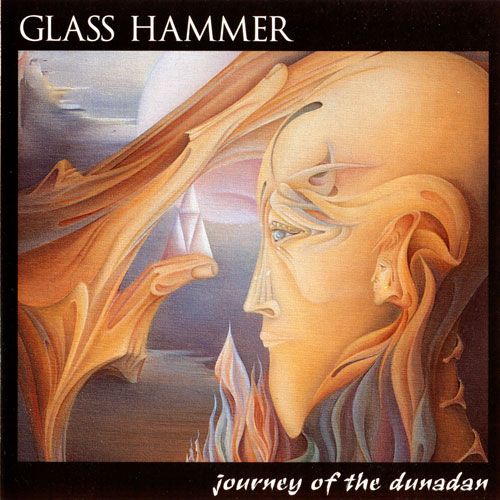 This debut album from a Floridian duo of multi-instrumentalists leaves a host of unanswered questions. First, after the '90s have already proven to be a prolific breeding ground for new and original talent (e.g., Il Berlione, Änglagård, Deus Ex Machina, etc..), of what value is an entirely Tolkein-based fantasy/concept album? Glass Hammer offers us just that, complete with in-character voice-overs, narration and sound effects. At only 30 seconds in to the album, the memories of Spinal Tap's "Stonehenge" come racing back. Admittedly, it gets better than that (but not too much) with a few instrumental passages that sparkle with tasteful organ licks. The overall sound is made up of organ, synth, electronic drums, bass, and vocals (which are dull, lackluster, and over-used as a rule). Fans of modern Kansas might like the music here, and if you're familiar with the short-lived Cinema label from the late '80s, this has a lot in common with that sound as well. But because Journey... fails at such a fundamental level, it's difficult to swallow even the better moments, and its certainly not worth having to weed through the tired clichés to find them. History has shown that originality is key in propelling the most artistic bands, but according to the liner notes Glass Hammer considers this album a success if only they spark an interest in the Tolkein novels. So what we're left with, then, is basically propaganda for some classic literature which has proven over time it needs none. Hopefully Glass Hammer will find better, more inventive ways to spend their time and energy in the future.