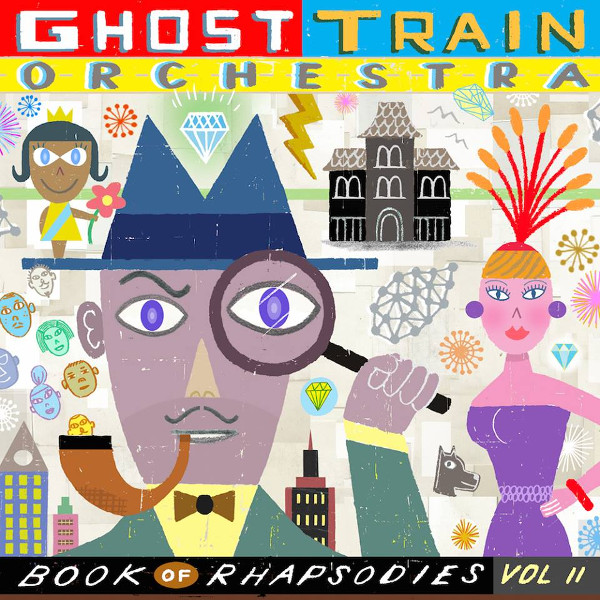 When it comes to the music of the 1930s, names like Duke Ellington and Count Basie come readily to mind, and their music is readily available. But during that era, many other composers and bandleaders were filling ballrooms and making 78RPM records. Brian Carpenter and his Ghost Train Orchestra are on a mission to bring the forgotten gems of that era to light, digging through dusty bins of old 78s and painstakingly transcribing the music found on them. But their goal is not to reproduce the old music note for note — they aim to interpret the tunes through a modern lens and have fun doing it. They are entertainers, not historians. After all, the 78s still exist, so if you want to hear the originals, you can seek them out. (Many are becoming available online in digital repositories.) In addition to Carpenter, who plays trumpet, the Orchestra consists of Mazz Swift (violin), Ben Kono (alto saxophone), Dennis Lichtman (clarinet), Petr Cancura (saxophone), Curtis Hasselbring (trombone), Ron Caswell (tuba), Avi Bortnick (guitar), Michael Bates (bass), Rob Garcia (drums), and Rob Reich (accordion). A number of vocalists also participate, including a chorus of children for “Kindergarten Flower Pageant.” Yeah, they’re having fun. Much like in an old-time radio broadcast, there are occasional announcements to introduce a tune, done in an appropriately deadpan tone even if the words are a little goofy. The main anachronism in the arrangements is the occasional prominence of electric guitar, which sometimes takes on a distorted tone that would not have been possible during the original era. That’s an observation, not a criticism — in no way does it detract from the quality of the album. A number of groups have lately been plying similar streams of music (Microscopic Septet comes to mind), but Carpenter’s ensemble has their own twist on it, and their own unique identity. All of the players are excellent (Swift stands out on several songs with some outstanding solos), and they dive into the material with a spirit of adventure and joy that shines through. Take a break from distortion and electronic trickery and get a taste for how people had fun 80 or so years ago. Bonus points if you wear vintage threads...