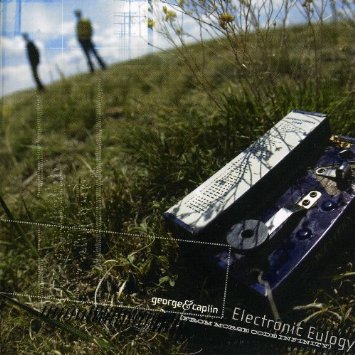 The electronic duo of George and Caplin (AKA Jason Fredrick Iselin and Jeffrey Wentworth Stevens) has obviously been paying attention in their History of Electronic Music classes. On several of the tracks, there’s a definite vibe of early Kraftwerk, tempered with an 80s melodicism along the lines of New Order. There’s also a definite post-rock sensibility at play, with reverb-heavy sonic environments populated by minimal acoustic guitar strumming and low-mixed vocals, rather like mellow Sigur Rós. This surface simplicity and directness belie an inner complexity, for there are almost always subtle countermelodies and interlocking parts weaving in and out of the arrangements. I’m also reminded a bit of the deceptive, almost child-like simplicity of Brian Eno’s work, for example the instrumental pieces on his early solo albums. All in all, it’s quite an engaging concoction, with moments of darkness contrasted by bouncy, happy parts. Another lesson of history they’ve learned is to avoid the Pure Electronic Trap, where good compositions are sabotaged by the absence of human feeling. Live (AKA real) instruments blend with programmed ones, and all are subjected to a wide variety of manipulations, from old-school like reverb and backwards masking to new-school like sampling and quick-cut chopping. This is an enjoyable CD that should find fans both among lovers of pop music and electronic experimentation.