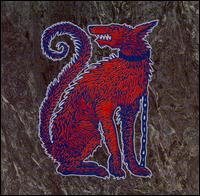 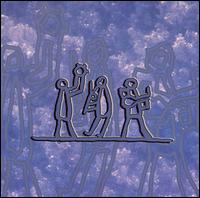 Over the last few years, I’ve had several occasions to gush about how wonderful Garmarna is, namely the release of each of their three American CDs (the first two on Omnium, the third on NorthSide). I missed their first release, which came out only in Sweden. That shortfall is now alleviated by NorthSide’s reissue of that first EP, with the addition of six instrumental demos from before that recording. The band in 1993 was a quartet consisting of Stefan Brisland-Ferner (mainly on violin, hurdy-gurdy), Jens Höglin (percussion), Gotte Ringqvist (luteguitar, violin and so on), and Rickard Westman (bouzouki, guitar). Their basic style was established: droning hurdy-gurdy with violin and acoustic guitar playing medieval-sounding Swedish melodies, all backed by aggressive, intense percussion. Emma Härdelin joined in on three of the six tracks as a guest vocalist – it’s easy to see why she became a full-fledged member of the group thereafter. The 1992 demos find the band a little more stripped down but still sounding full of energy.

For Hedningarna’s beginnings, you have to go back to 1989, when multi-instrumentalists Björn Tollin, Anders Norudde, and Hållbus Totte Mattson recorded an acoustic album with a similar base: Swedish folk tunes on acoustic instruments backed by percussion from around the world. Though decidedly on a lower energy level than Garmarna, Hedningarna fascinate with greater variety, adding flute, bagpipe and “PVC bass willow flute” to the stew. Their electronic experimentation was still in the future (likewise the Finnish singers), but the probing spirit is unmistakable.