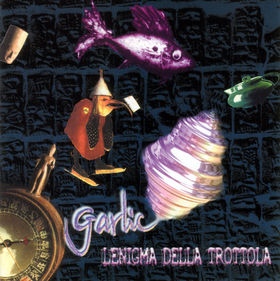 Italian three-piece Garlic recorded this album live in the studio over three days with no overdubs. The songs are all instrumental guitar, bass, and drums with interesting electronic processing adding some extra sonic spice. The songs are very experimental and improvised sounding. “Il Pezzo delle 5” sounds like it could be one of the Red-era King Crimson improvs. And there is a song that incorporates the middle 13/8 part of “Starless.” However, for the most part, Garlic is much more jazz and RIO influenced than Crimson-inclined. The songs definitely don’t make frequent use of standard major/minor chord progressions. “Goya” grooves through some off chromatic patterns and some alternate microtuning sections. “Batret Blue,” for example, has some tweaked-out processed guitar that would make Stockhausen smile. “Slowland” starts off like it might be the exception piece with a “normal” guitar intro, but quickly turns in a more experimental direction. There’s even a resonance guitar middle part in that song that sounds like a didgeridoo or some Tuvan throat singing. The drums, especially the snare, are often understated and frequently sound like they are being played with brushes instead of sticks. That tends to add to the spacey, jazzy sound of the tunes. Fans of non-standard melodies and spontaneously composed songs might enjoy the sound and taste of Garlic.