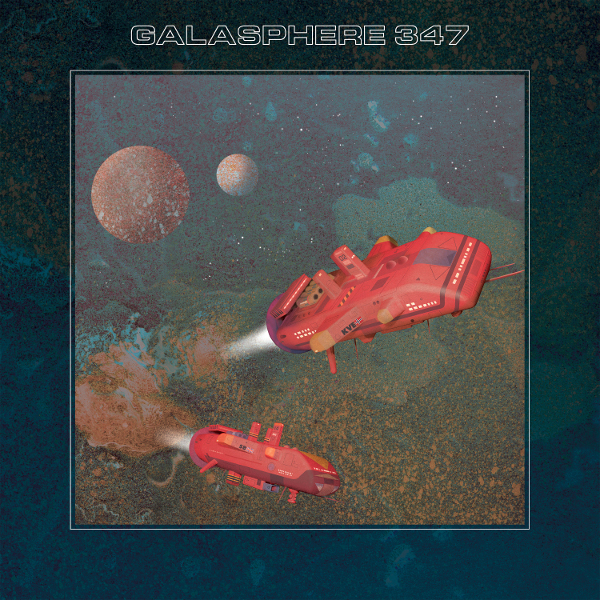 Take a look at who’s involved in this project, and you’ll see familiar names (if you’re a person who pays attention in the world of progressive rock): from Henry Fool we get Stephen James Bennett (vocals, keyboards, guitar); from White Willow we get Ketil Vestrum Einarsen (keyboards, programming, flute), Jacob Holm-Lupo (guitar, bass), and Mattias Olsson (drums, keyboards, guitar); Holm-Lupo and Einarsen are also in Weiserbergland; Einarsen and Olsson are both in Kaukasus; Einarsen has also worked with Jaga Jazzist and Holm-Lupo with The Opium Cartel; and Olsson is the go-to drummer in Northern Europe, with credits including Anglagard, Pixie Ninja, and Necromonkey aside from the groups already mentioned. Call it a supergroup if you want to — let’s listen to the music. Galasphere 347 consists of only three tracks, all over ten minutes in length, for a total of 41 and a half minutes. Much like Kaukasus, this band spans a wide territory of sounds, from spaced-out atmospherics to Genesis-like prog rock to Floydian grooves to elaborate vocal arrangements. In spite of their length, these pieces are not made of multiple varying sections, but leisurely development of consistent themes — more like extended song forms than suites. There’s a part of the first track, “The Voice of Beauty Drowned,” where the keyboard parts sound like something that could have come from one of the better tracks off Duke or Abacab, though in this context (the final third of a ten-plus minute track that is generally not Genesis-like) it seems quite fresh and not at all derivative. “The Fallen Angel” starts out almost like one of those quiet Porcupine Tree songs, or maybe something Tim Bowness would do (Bennett has worked with Bowness, so that’s not unexpected), but then goes into an instrumental section with a tricky rhythm, and suddenly there’s a trombone solo (the only place where the instrument appears). “Barbarella’s Lover” is the final track, a 15-minute tune with two main sections: a ten-minute vocal tune that builds dramatically, diverts into a quieter section, then builds again, and an instrumental tune in 5/4 that jumps out and takes over for a few minutes before relinquishing control back to a heavier version of the vocal section’s finale. Throughout the album, guitars mostly play supporting roles, and the leads are taken by keyboards, with occasional use of flute and trombone. Obviously, the lengths of the tracks will be problematic for listeners in a hurry, but for those willing to take the time, this is some fine progressive rock — high quality imaginative stuff from beginning to end, as you might expect from these musicians.

The Feck - The Feck – The Feck is a four-piece from Milwaukee, and while no instruments are listed with the names per se, it sounds like we have two (or three) guitars, bass, and drums/percussion operating in that...  (1999) » Read more

The Hostess Wore a Red Dress