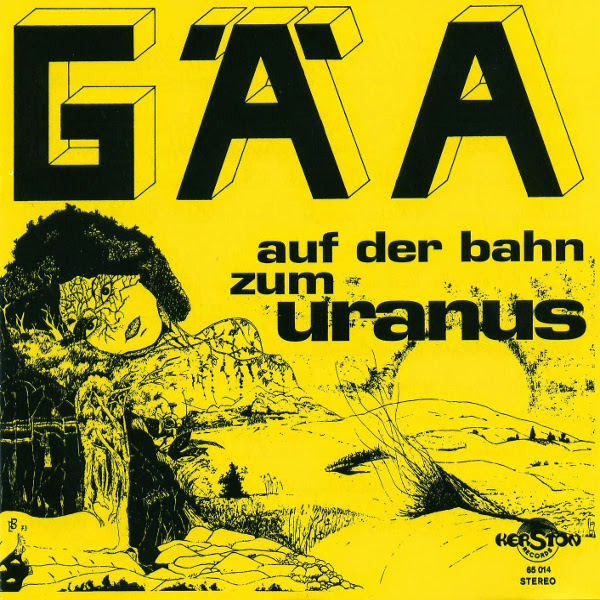 Here is the debut album Auf der Bahn Zum Uranus (On The Way To Uranus) by the Saarland based five-piece band Gäa (Gaia in English), named after the Greek earth goddess. This is one of the rarest artifacts, the original LP issue was probably only a thousand units, nobody who was in the band seems to recall the exact number, though by now it’s been reissued numerous times on both vinyl and CD, so it’s an easy find now, although the CD issue at hand on Garden of Delights no doubt has the most information packed into its booklet. The original label, Kerston Records signed the band in 1974, but started losing interest almost immediately after, and following numerous delays finally scheduled a half-hearted and hurried recording session on a Saturday afternoon; although the results sound fine, if a bit dated for 1974, the six songs here had the potential to sound so much better had more attention been given to production. The album begins with “Uranus,” starting out with a folky sound and spoken lyrics in German, growing more intensely psychedelic and eventually incomprehensible, before shifting into rock mode with wah guitars and vocals, then finding a more meditative sound back in the folkier realm. All of the band’s lyrics are sung in German throughout the album’s six tracks. The second cut “Bossa Rustical” opens with a quiet Spanish guitar piece before it really gets moving into a rythmic rock zone, not at all unlike something Santana might have done about five years earlier. Along the way, the album starts to incorporate less folk flavorings, until, by the second side there is more of a late-sixties west-coast psychedelic rock vibe propelling their sound forward, with “Mutter Erde” (Mother Earth) being exemplary of this, sounding a bit like Jefferson Airplane circa 1968 in full-on rock mode, and so the feeling continues through the remainder of the second album side, with the dark and ensive “Welt Im Dunkel”, and closing with the excellent “Gäa,” again with a nod to early Santana. This isn’t an album that generated a lot of initial excitement for me, but over numerous listens with my head in the right place, it has definitely revealed its brilliance and charm.