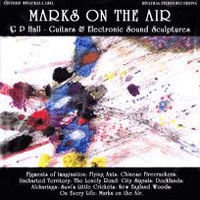 This recording serves two masters. First, it presents soundscape artist G.P. Hall live on stage, and secondly, it demonstrates the binaural recording process. Binaural recording places two small microphones on either side of a dummy head to record an event that, when listened back through headphones, enhances the realism of the listening experience. Or so I'm told. I didn't use headphones while listening to the CD so I'll just have to take the publisher's word for it. As far as G.P. Hall goes, I'd place him musically somewhere between Robert Fripp and Peter Gabriel though not as inventive or creative as either. Many of the pieces on Marks on the Wind remind me of the beginning of Gabriel's "Lay Your Hands on Me" in that bursts of percussion (entirely synthetic here) intersperse with improvised soundscapes, played either on guitar or bass. There are no vocals and the overall ambiance of the music is subdued and mellow. There's a nice industrial quality to much of Hall's work due to his choice of sounds and effects and in the liner notes he professes a fondness for the aesthetics of industrial settings. My only gripe with the disc is that the pieces are generally too short and never really develop beyond their initial thematic statement. Consequently, they fail to generate a great deal of energy or drama. And, for all its vaunted glorification in the booklet, I found the recording to be somewhat flat and sterile. While I'm sure it suited economic and practical needs, recording to a Mini-Disc is rarely going to produce a high-quality product, binaural or not. Still, for fans of the soundscape concept, this one should please.

Alexander Vogel & Collaborators - Eight Releases from 2004 – Alexander Vogel is your atypical teenager with an affinity for percussion and English improvisational icons. In late 2004 he took it upon himself to begin solo home recordings which soon evolved into...  (2005) » Read more