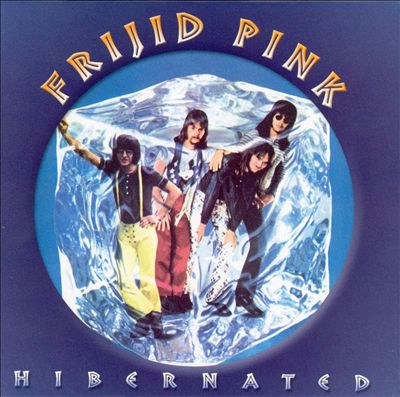 After forming around 1967 in the fertile garage/psych scene of Detroit, Frijid Pink gigged heavily and built up a regional following before stepping into a recording studio. Their first two singles failed to attract much attention, but their distortion-laden take on "The House of the Rising Sun" (patterned after the now more-famous Animals version) scored a surprise hit in 1970, and they got to work on a debut album for the Parrot label. The self-titled effort features that cover along with their early singles "Tell Me Why" and "Drivin' Blues" along with eight other hard-rocking tunes full of strong guitar work (courtesy of Gary Ray Thompson), mostly on the blues-rock side, without much psych aside from the occasional wah-wah pedal. The follow-up album, Defrosted, carried on in a similar vein but failed to attract much public interest. After that, the group effectively disbanded, though drummer Rich Stevers put together a new band with the same name and released Earth Omen in 1973 – a decidedly inferior effort, but it's part of the box, so you don't get to pick and choose. This set contains those three albums in their entirety and no bonus tracks or other material. (Another LP, All Pink Inside, was the band's swan song in 1975, though it is not included in this collection.) At their best, Frijid Pink is a competent heavy blues-rock band of their era, never original or flashy enough to grow beyond their beginnings. Fans of similar bands such as Savoy Brown and Humble Pie will likely enjoy these albums as well, though I wouldn't go so far as to recommend them to anyone else. Based on the premise that as much music as possible from the past should be preserved, it's good to see this bit of history reclaimed for the digital age, but that doesn't necessarily make for something I'm likely to pull out and listen to very often. As far as I can tell, no member of this band went on to achieve fame in other endeavors.

King Crimson - Vrooom – What a pleasant surprise... After just a minute of the opening title track, it's clearly apparent that this is no rehash of the 80s incarnation of Crimson. This double-trio formation (two guitars, two...  (1995) » Read more