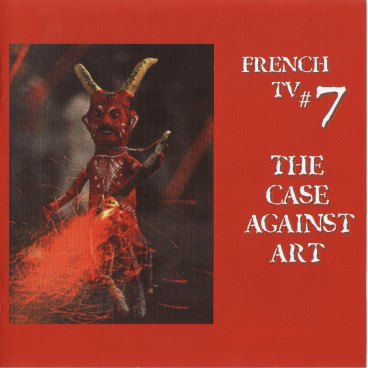 You have to hand it to Mike Sary and Co., every French TV seems an improvement on the last, a feat impressive considering the strength of 1999's The Violence of Amateurs. Album number seven is here with five long pieces of music and guests including Trap's Warren Dale, guitarist Shawn Persinger, and vocalist Cliff Fortney. All three are present on the album's middle piece, a cover of Happy the Man's "Partly the State." While this rates among my least favorites of that band's songs, the rendition here is a vast improvement over the one on Beginnings, capitalizing on the broad and tasteful strengths of French TV's current line up. The music certainly evinces a number of RIO and Canterbury influences, but Sary's integration of these over the years into his own vision has resulted in an idiosyncratic blend that is practically recognizable now. It's not just the complexity and dynamics, which are abundant throughout, but it's also the quirky humor and oddball time changes that do more than deliver good music, they also deliver it with a casual panache often missing in the dead-serious world of progressive rock. Another of the album's strengths is its wonderful dynamics, a chromatic range from the full-tilt and rocking to the soft and introspective, all enhanced by the tasteful and instrumentally eclectic guest appearances. For fans of the intricate, humorous, and left field, The Case Against Art is likely to leave one with an unsolvable paradox, as this makes a rather damn good case for art. This is clever, tasteful music the fan of avant-rock should make a priority purchase.