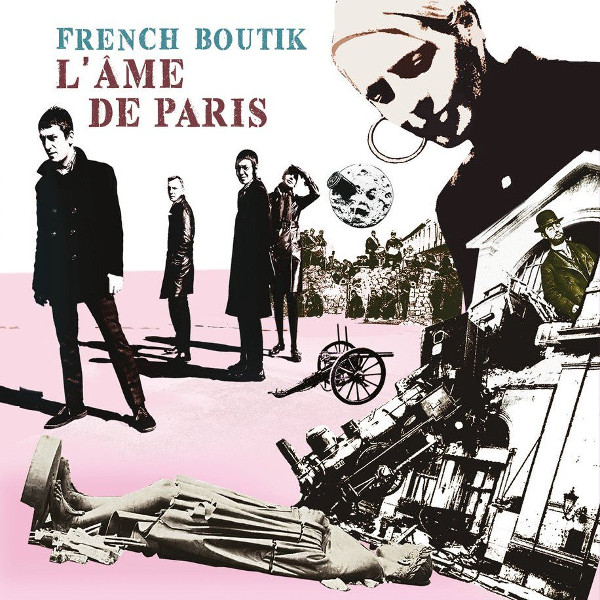 Overall all, L’Âme de Paris is an excellent set of aggressively pleasant French psych pop songs by French Boutik. L’Âme de Paris is meticulously constructed from the exquisite corpse cover to each of the ten songs. French Boutik, Gabriela Giacoman (vocals), Serge Hoffman (guitar, vocals), Zelda Aquil (drums, vocals), and Jean-Marc Joanès (bass), is a boutique band who do not shy away from catchy melodies while propelling their music by Serge’s aggressive chords and Zelda’s energetic drumming, while at the same time exploring experimental collages. While most of the songs are originals, French Boutik covers Henri Salvador's 1968 hit "Beta Gamma l’Ordinateur,” which sounds much better than the original. The best track on the album is “The Word” with its acoustic and jangling surf guitars and English lyrics. The band has really captured the essence of psych pop on this song. The other interesting track is the title song that closes the album. Here French Boutik attempt to capture the soul of Paris through old Radio France International radio clips, airplane flyovers, party sounds, as well as the band playing and singing. So if you are in the mood for something completely different from today’s music, yet vaguely familiar, check out French Boutik and what they label as Pop Moderniste on their new album L’Âme de Paris.

Thinking Plague - A History of Madness – Most music critics (and listeners too) tend to get caught up in the genre game when describing music. We think in terms of qualities like loud/soft, electric/acoustic, rocks/doesn’t. But there...  (2003) » Read more