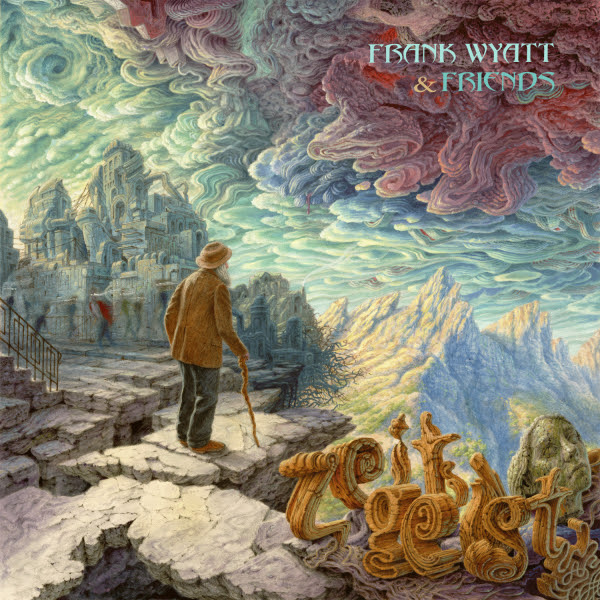 Frank Wyatt was one of the main writers in Happy the Man so many years ago, as well as playing keyboards and saxophones, and as such he was a primary contributor to the band’s “sound,” which is readily identifiable. Since the HtM reunion around 2004, there have been a number of projects involving Wyatt (and Stan Whitaker, the band’s guitarist and singer), among them Pedal Giant Animals (one album in 2006) and Oblivion Sun (two albums from 2007 and 2012), but Zeitgeist is pretty much a Frank Wyatt solo album in the sense that he composed every one of the ten pieces at hand. While I’m certain he could have recorded the entire thing himself, on most of the tracks he brought in his old collaborators from HtM and other bands; in fact every musician who was ever in Happy the Man with the exception of early singer Dan Owen and drummer Coco Roussel are featured here on this track or that, plus most members of Oblivion Sun and Pedal Giant Animals contribute here as well. And as one might expect, this does bear many similarities to the HtM pedigree, and I’m sure most readers will be delighted. The album could be conceptually divided into two parts: the first six tracks are ‘songs’ with two vocal tunes, the title track and “Eleventh Hour” – Stan Whitaker sings on the former, and Cliff Fortney sings on the latter – and the remaining four are instrumentals, among them are the excellent “Twelve Jumps” and “Fred’s Song” which both are solid examples of Wyatt’s instrumental forte, both tuneful and accessible, but with interesting turns and twists that make them uniquely his style. “The Approach” is a longer track that makes great use of the sitar (played by Peter Princiotto) throughout, as Joe Bergamini’s drums and David Hughes’ bass lines plus some wordless vocals at various points make it one of the most interesting tracks here. The second part of the disc comprises Wyatt’s “Perelandra Symphony” in four parts, a serious 25-minute piece of orchestral music created entirely by Wyatt with sampled instruments, with help from Princiotto on the arrangements, there is little precedent for it among Wyatt’s previous endeavors, but it certainly deserves attention and caps the album off nicely on an entirely different note, where ever-shifting moods and beautiful melodies intertwine. Overall, an outstanding album that should be heard by all.