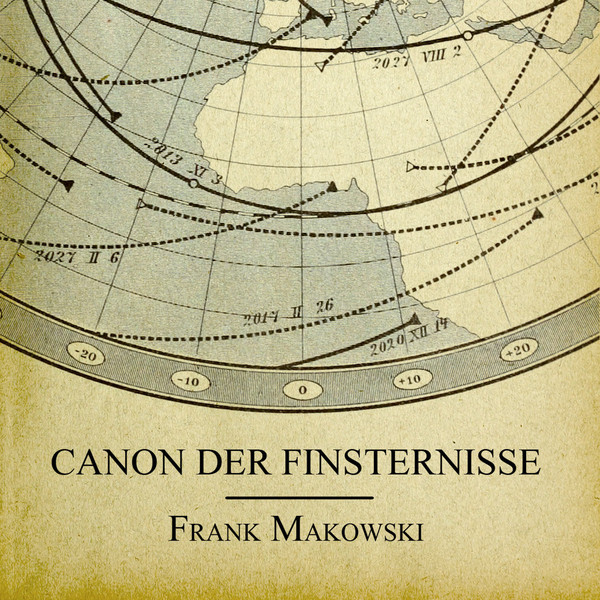 Frank Makowski is a German electronic composer and musician, active since the early 90s as a solo artist recording under a variety of monikers (Tranquility, The Speed of Dark) as well as being a founding member of groundbreaking electronic ensembles Mirkom and [‘ramp]. In addition to his work as a musician, he also has many credits for album cover design, including Cosmic Hoffman, Edgar Froese, Manuel Göttsching, Rainbow Serpent, and others. Best I can confirm is that Canon der Finsternisse (catalog of eclipses) is Makowski’s first release using his real name, and it’s certainly one that touches on the many bases of his lifelong craft, oscillating between deep floating ambient, elements of prog rock, textural soundscapes, and even modern classical, track depending. Canon der Finsternisse refers to the work of the late 19th century Austrian astronomer and mathematician Theodor Ritter von Oppolzer, whose Canon became a standard of modern astronomy shortly thereafter, listing over ten thousand lunar and solar eclipses from the past, present and future with a high degree of accuracy. Makowski’s seven compositions herein reflect the play of the celestial mechanics and the immense vastness and voids of space. Makowski’s instrumentation includes modular synthesizer and piano, as well as a variety of electro-acoustic instrumentation, electronic effects, and more. The opener “Fliegende Schatten (Canon 1)” opens a floating ambient course that sets the stage for all that follows, like a journey over and through a beautiful pillow of clouds and celestial vistas, flowing and ebbing with what seem like the voices of angels reaching down from heaven, coupling with a subtle dreamy percussive presence, eventually finding a semblance of rock elements. “Okkultation” breathes slowly to life, with a curious collection of mysterious sounds and vibrations, making way for “Kernschatten,” a subtle dreamlike entrance into a deep cavernous void. “Streulicht” (scattered light) makes greater use of the piano, though in a beautiful, ambient, almost transparent way, underscoring spectral shifts, taken a step further by its follow-on “Finsternislimit (Canon 2)” (eclipse limit), moving slowly from silence to an eerie and cryptic presence with seeminly random yet extremely subtle strings of piano melodics leading the way forward. The album’s longest track “Syzigium” evolves over roughly an album side, making ample use of sonic space as emotion drives the pace with gentle bursts of piano and echoey loops of sound, underscoring its minimalist nature, gradually fading to silence. The closer “Sunnenvinster (Canon 3)” is another fifteen-plus-minute epic that enters so quietly that it hardly makes its presence known before the four-minute mark, but does offer deep, warm, and rich ambient textures as it proceeds. If one appreciates the ambient minimalist sounds of artists like Brian Eno and similarly inclined artists, this 72-minute epic in seven parts may offer a respite from the steady beat and punishing raw power of rock.