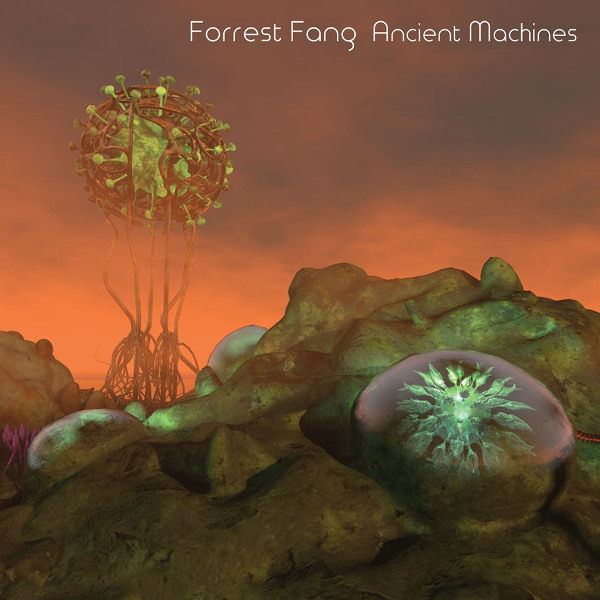 Early on, which for Forrest Fang would be the 80s, much of his music was textural and minimalist, all things moving slowly through an ever-evolving listening space. Albums like Some Brighter Stars, Migration, and his first CD, The Wolf at the Ruins, all create a variety of ambient sonic fabrics over which sounds and feelings evolve, sometimes within powerful atmospherics, using all of the instruments he had at his disposal including violin, synthesizers, percussion, and numerous stringed instruments from around the world. In the liner notes to his latest release, Ancient Machines, Fang acknowledges those early sounds and influences: Steve Reich, Philip Glass, and Terry Riley, and attempts to revisit them here, though now, thirty plus years on, the sounds are subject to his expanded imagination and equally enriched and enhanced arsenal of sound sources. Bands of sonic color and muted shades weave throughout the shimmering fabric that flows forward creating an immersive space for the listener, a meditative soundworld that changes and evolves just enough to remain interesting throughout the journey. There are eleven tracks, most primarily synth oriented to varying degrees, although some, like “Smoke Rings” are almost entirely based on bamboo percussion with some studio enhancements. “A Recursive Tale” features a bold melodic piano thread enshrouded in a fog of heavenly electronic voices that grow in strength as the piece goes forward. The three-part suite, “The Celestial Diver,” dedicated to the late minimalist composer Piero Milesi, spans almost nineteen minutes, and uses an exotic blend of massed zither, gongs, violins, percussion, and synths to open a panoramic soundworld, with what sounds like ghost voices under the surface trying to break through, while the second movement captures more serene percussive elements and features the same stringed instrument (some kind of lute) used on those early recordings, all swimming in a beautiful liquid ocean of sounds. The closing movement gets going with another familiar stringed sound that grooves along while powerful ambient electronics build slowly as the piece goes forward, adding some world percussion to add to the magic. There’s plenty more here that longtime listeners of Fang’s work will find intriguing, a deep sonic dive mixing old concepts with new.