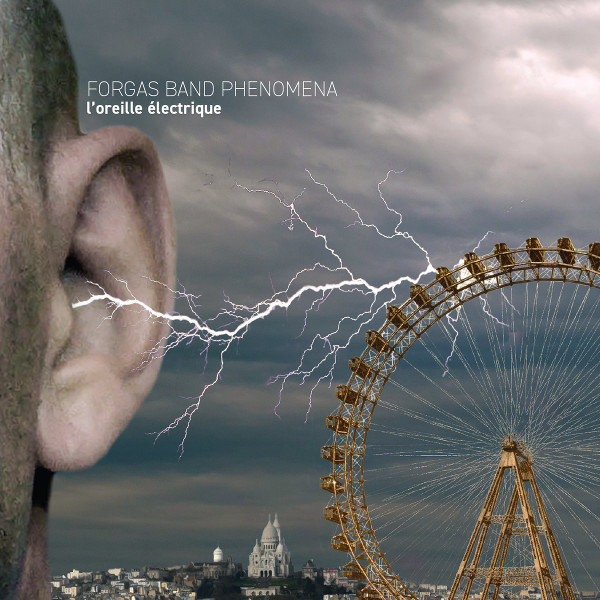 It’s been quite a few years since we last heard from Forgas Band Phenomena, but little has changed in quality, sensibility, or even personnel. The only changes in musicians for L’Oreille Électrique are Gérard Prévost on bass, replacing Kengo Mochizuki, and Pierre Schmidt on guitar, taking over from Benjamin Violet. The rest of the crew remains intact from 2012’s Acte V: Igor Brover (keyboards), Sébastien Trognon (saxes and flute), Dimitri Alexaline (trumpet, flugelhorn, trombone), Karolina Mlodecka (violin), and of course Patrick Forgas himself (drums). This album presents five longish tracks — only one under ten minutes — and comes in at 54 minutes, which is a perfect length, long enough to stretch out but short enough to not get tiring (or become too much of a good thing). These pieces wind their way through varying sections, earning their length not by endless solos but by presenting new ideas every few minutes. When there is a solo section, it’s usually backed by a riff or chord progression that’s different from what happens before or after, and it never goes on too long. The most apt comparison would be to National Health, though the saxes and brass lend a jazzier vibe to the sound. In the same way that “Tenemos Roads” or “Elephants” is comprised of different sections that are mashed together, Forgas’ compositions are like mini-suites of good ideas. If you liked previous Forgas albums, it’s a safe bet you’ll enjoy this one too, and if you like good progressive jazz-rock but aren’t familiar with this band, it’s a great place to start.