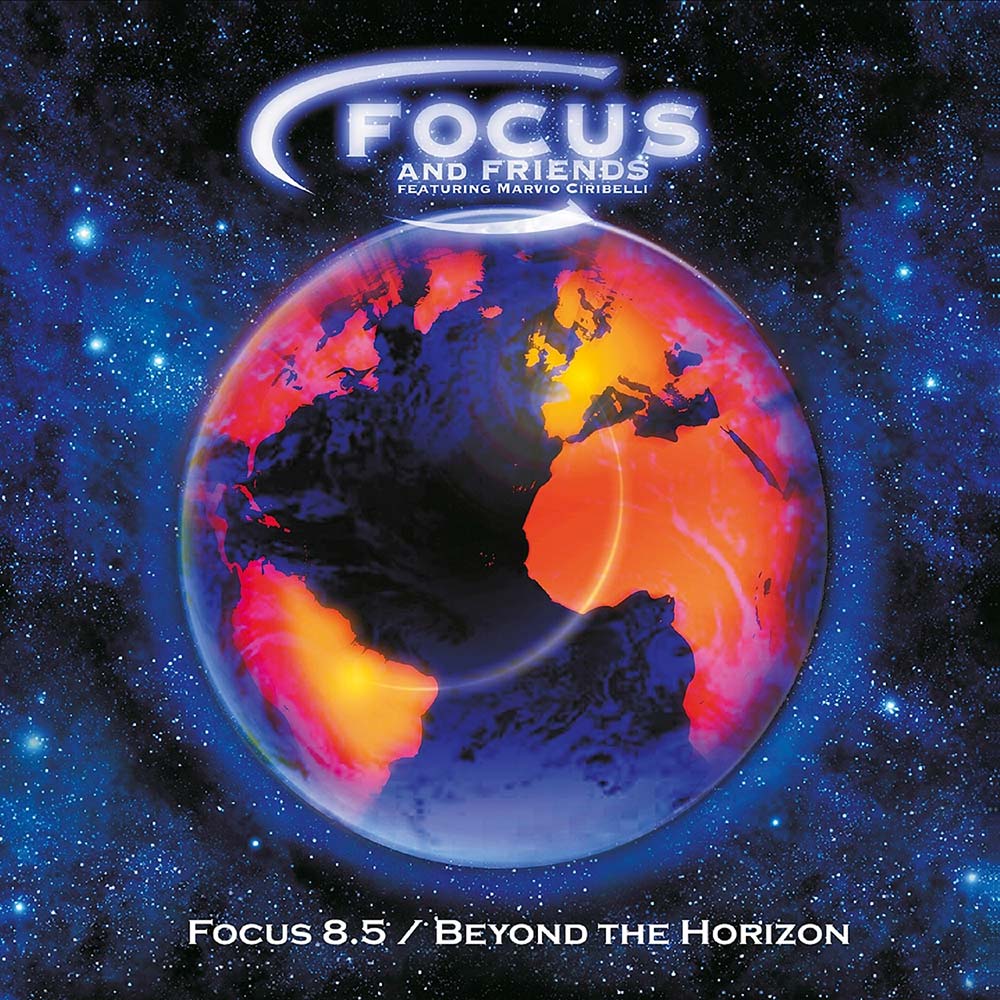 It was in August 1997 that we learned about the reunion of Focus, with original members Thijs van Leer and Hans Cleuver, and bassist Bert Ruiter who played with them from Focus 3 onward, plus new guitarist Menno Gootjes. It was the first time the band had played together since calling it quits in the late 70s after the poorly received Focus con Proby album. By 2002 the band, now with van Leer and some new members (bassist Bobby Jakobs, guitarist Jan Dumée, and drummer Bert Smaak) had released their first new album Focus 8, featuring new material, and touring followed for several years. By 1995 Smaak had left and been replaced by Pierre van der Linden, who had played with the band from their second album onward, which brings us to the genesis of the album at hand. The sessions for Focus 8.5 / Beyond the Horizon were recorded inbetween live dates on the band’s South American tour. It started out as a jam in Niteroi with local musicians Marvio Ciribelli and Marcio Bahia, and ended up in Rio de Janeiro for recording sessions that ended up involving a dozen or more additional musicians and vocalists. From the very first moments of “Focus Zero,” one will know this is Focus, but with a new twist that reflects the involvement of additional musicians (in this case Marvio Cirabelli on second piano, Sergio Chiavazzoli on guitars, and Arthur Maia on bass) and takes on a more jazzy feel that freshens up the band’s sound. On most of the tracks here, van der Linden is double drumming with Marcio Bahia, giving the tunes a far more percussive feel, along with percussionists Flavio Santos and Amaro Junior (all four shine in the seven-plus minute “Millenium”). The drummers get their time in the spotlight on “Talking Rhythms,” which begins as a solo piece for double drums and eventually morphs into vocalizations by the two drummers. Amazing. “Hola, Cómo Estás” introduces singer Marcio Lott as well as female vocalists Mylena Cribelli and Thais Motta who feature on a number of the albums other cuts. “Rock 5” is hardly rock at all, but more an expanded jazzy piece written by Marvio Ciribelli with only bassist Jakobs from the regular Focus lineup involved, plus a number of additional instrumentalists and vocalists, but man, is this molodic tune ever so sweet and unforgettable. All taken, this is a very surprising expansion of the Focus sound, and will be of interest to all fans of the band.