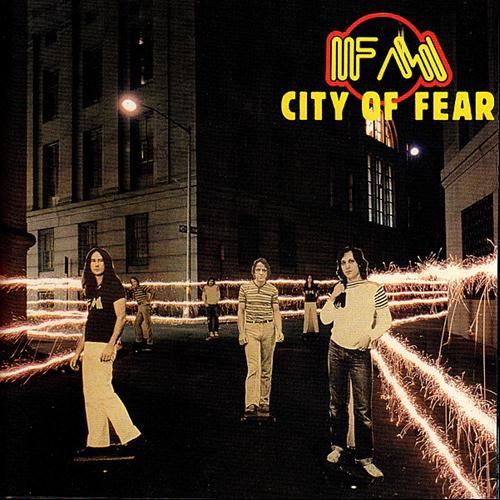 Canadian trio FM's fourth album finds the lineup of Cameron Hawkins (synth, bass, vocals), Ben Mink (violin, mandolin, vocals) and Martin Deller (drums) unchanged from the previous album, but this time out Larry Fast, who had previously worked with the band in a synth programming capacity, is now the
album's producer. No doubt due to Fast's presence, this is the band's best sounding album to date; it contains some of their finest work, and some of their worst (not counting the two studio albums that came after this one). City of Fear contains ten songs, five of which stick to their tried and tested progressive approach, while the other five find the band attempting to move in a more commercial radio-friendly direction, with only partial success. Of the latter five, "Up to You" and closer "Nobody at All" hit the bullseye for being accessible and tasty, and either or both could have been breakout hits for the band. Two others "Truth or Consequences" and "Power" come off as fairly cringeworthy. Now on to the more progressive cuts, of which "Surface to Air" and the title track are immediate standouts for their strong melodic punch and temperate accessibility. Even more interesting are the three tracks that were later used in the soundtrack to the slasher film The Incubus: opener "Krakow" is hands down the album's most powerful track, while the dark and bizarre "Lost and Found" is perfectly suited for its place in the movie, as is the eccentric "Riding the Thunder," perhaps FM’s hardest rocking song ever. City of Fear has its high and low points, but is nonetheless worthy of a place next to the previous three.

Hidria Spacefolk - Balansia – Normally it would be problematic for a band to sound the same on their third album (not counting a remix project) as on their first, especially if the first is basically a self-released demo. But when...  (2005) » Read more