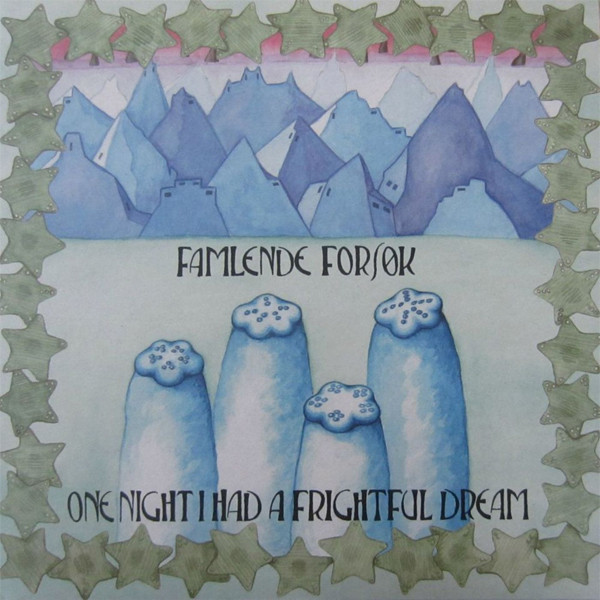 Famlende Forsøk, a Norwegian band (Lumpy Davy, Chrisph, and Brt) with roots in the industrial music scene, has been recording since 1981. But of late, due to a number of side projects, their musical output has been on hold. In fact, you may recognize Lumpy Davy from his psych band The Smell of Incense. Famlende Forsøk has been obsessed with HP Lovecraft since the band’s inception and finally their musical tribute has culminated in this demo CD. Some of the music on this demo was performed live in 1988, but it does not sound dated. Since it is a demo, there are some rough edges, but this fact does not detract from the listening experience. Borrowing heavily from Lovecraft’s work, Famlende Forsøk skillfully blends it with their music to create the proper atmosphere of chilling horror of Cthulhu and his minions. Sometimes progressive, sometimes atmospheric, FF offers you the Beginners Guide to Lovecraft. Many of his important works are excerpted (The Dunwich Horror, The Call of Cthulhu, The Shadow over Innsmouth, The Dream-Quest of Unknown Kadath, Nyarlathotep, and At the Mountains of Madness) except for The Case of Charles Dexter Ward. Brt is the narrator for these eerie supernatural tales of the Old Ones and the saurian inhabitants of an alternate New England and his exotic Norwegian accent conveys an appropriate amount of fear and mystery. Gibbering madly in the darkness, Cthulhu calls you to this CD. You must obey, or fear a long and painful death.

Then twelve months later the album was officially released on September Gurls. Over the intervening 12 months, FF smoothed the rough edges, recorded some new vocal tracks, done some minor re-mixing, eliminated a couple of the weaker songs, and reordered the sequence. The result is a superb collection of appropriately eerie and eldritch songs that exquisitely capture the ambiance of Lovecraft’s fiction. Brt’s otherworldly voice adds that extra edge when quoting excerpts from The Shadow Over Innsmouth or At the Mountains of Madness, or invoking Yog-Sothoth in The Dunwich Horror. Spicing up the package is beautiful artwork by Gunhilde Langerud, whose art has also graced the The Smell of Incense’s last two releases, and an eight page booklet containing a short bio of HP Lovecraft, a Famlende Forsøk bio and discography, and a bio of Gunhilde. Over thirteen years in the making, this labor of love is now complete and worthy of greater attention. Cthulhu waits!

Exclusive Raja - Off the Map – Off the Map is the debut release by a new French band on Musea's Musea Parallele series. Picture if you will a musical blend of Robert Fripp, Richard Pinhas, Alain Markusfeld, and Camel and you...  (1994) » Read more