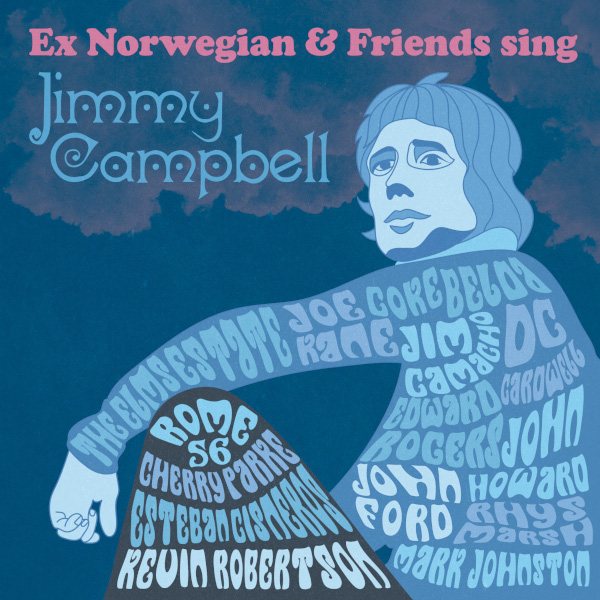 Jimmy Campbell (4 January 1944 – 12 February 2007) was an English musician and songwriter from Liverpool and a member of Merseybeat groups The Kirkbys, The 23rd Turnoff, and Rockin' Horse, as well as releasing three solo albums: Son of Anastasia (1969), Half Baked (1970), and Jimmy Campbell’s Album (1972). Jimmy never achieved commercial success like his Liverpool contemporaries, The Beatles, but his songwriting was on a par, garnering admirers from The Ramones to The Black Keys. Fast forward to 2009. When Mark Johnston wrote the liner notes on the Jimmy Campbell reissues he mentioned that a Jimmy Campbell tribute album was in the works. Roger Houdaille AKA Ex Norwegian, being a fan, immediately sent Mark his take on “Darling Sweetheart” plus a few more. This started the wheels to slowly move. Fast forward again to the Summer of 2020 with everyone in lockdown from the pandemic. Now was the perfect time to realize Johnston’s and Houdaille’s dream of a tribute album. Houdaille contacted a number of his musician friends to collaborate on the cover tunes sending tracks and recording new ones in their home studios. Gone now, but not forgotten, Jimmy’s magic lives on through Ex Norwegian and Friends Sing Jimmy Campbell, released April 2, 2021. A truly international effort, the fourteen songs feature Joe Kane in Glasgow, Coke Gelda in Pittsburgh, The Elms Estate in the East Midlands, Jim Camacho in Miami, Rhys Marsh in Trondheiim, John Ford (Strawbs) in New York City, Edward Rogers in New York City, Mark Johnston in Dallas, DC Cardwell in Tasmania, John Howard in Murcia, Cherry Parke in Haddonfield, Rome56 in New York City, Esteban Cisneros in Leon, Kevin Robertson in Aberdeen, Fernando Perdomo in Winnetka, and of course Roger Houdaille in Miami Beach. The Beatlesque nature of Jimmy’s songs shines through on these covers, moving from Lennon to McCartney to Harrison. And even post-Beatles Harrison. This was obviously a fun project for all involved, with every song a pleasure to experience. I especially like “Baby Walk Out with Your Darling Man.” Ex Norwegian and Friends Sing Jimmy Campbell is an eclectic, inspired, and heartfelt tribute that would certainly make Jimmy smile.