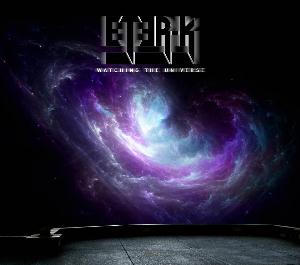 Fasten your seat belts. Hailing from Peru, Eter-K is a trio of guitar, bass and drums, loops, grooves and effects, their stock in trade being a heady contemporary take on classic psychedelic rock, imbued with energy and a strong jam ethic. Unknown to this writer previously, the band has been around in various forms since the late 80s, and has three previous releases to their credit. Watching the Universe features five long cuts, four easily breaking the ten-minute mark, giving the band plenty of room to stretch, develop their ideas, and evolve. At the center of the psychedelic maelstrom is guitarist and founding member Iván Santos, while the driving rhythm section of Eduardo Velarde and Adrian Arguedas, on bass and drums respectively, provide the structure and tie everything together. The band deftly explores some eastern textures on the fourteen-minute title track, while driving home some pure psychedelic guitar bliss on the burning "Like a Fish in Water." The disc is essentially an all-instrumental endeavor, some chanting effect vocals on one track and narration on another are hardly noticeable. While Eter-K has their own take on blistering psychedelia, fans of Gong, classic Hawkwind, Ozric Tentacles, and the Weinzierl / Anderson (British) version of Amon Düül, as well as hard driving instrumental stoner rock in general would do well to check these guys out.

Gulââb - Veils of Mystery – Rarely do I receive a recording that makes me stand up and take notice. My jaded and tired ears perked up as I flew my astral plane while playing Veils of Mystery. What's this you ask, a trip to...  (1994) » Read more