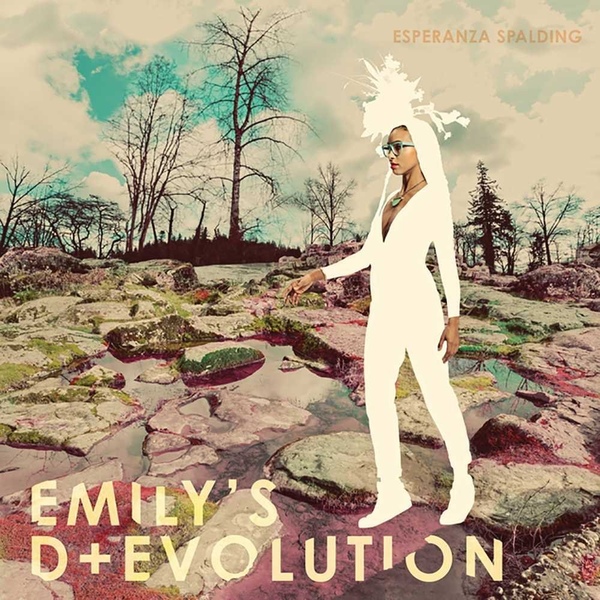 With elements of classic 70s funk, flighty vocal jazz, and sheer instrumental audacity, Emily’s D+Evolution shows Esperanza Spalding coming into her own as an artist to be reckoned with. On “Good Lava” or “Funk the Fear” you get something like Funkadelic (by way of Red Hot Chili Peppers) with a jazzy female vocal; with “Unconditional Love” or “Earth to Heaven” it’s reminiscent of Joni Mitchell’s jazzy work; “Ebony and Ivy” features a rapid-fire unison vocal chant and some really off-kilter riffs; “Farewell Dolly” could pass for a Hugh Hopper / Annette Peacock duet. Throughout, Spalding’s outstanding bass work and stunning voice are presented in imaginative arrangements full of quirky backing vocals, unexpected twists, sophisticated chords, and tricky melodies. For this time out, she sticks with electric bass, leaving her upright in the closet, and goes for an energetic set punctuated by floating, jazzy interludes. Her style of funk is based on melodic rhythmic lines rather than popping and slapping, which should make some bass guitar purists happy. Justin Tyson and Karriem Riggins handle the drums on a per-track basis, with overlap on the frenetic cover of Anthony Newley’s “I Want It Now” which finishes out the album proper (the album has been released in a number of versions with varying bonus tracks). Matthew Stevens shines on guitar, handling funky rhythm parts as well as edgy solos, his lines coordinated with Spalding’s bass for maximum impact. Emily’s D+Evolution has enough in the way of chops and inventiveness to appeal to lovers of electric jazz and fusion, and her voice is good enough that even those who favor instrumental music in the style should be impressed. One of the bonus tracks on many of the versions deserves a special mention. The “Alternate Version” of “Unconditional Love” takes the pleasant ballad in a totally unexpected direction, breaking into a wild jam after five and a half minutes, with a monstrous bass part from Spalding and Stevens’ guitar totally freaking out for nearly four minutes, then a brief, calming reprise of the vocal part. This is the real stuff, and no doubt a hint at how this material would be presented live.