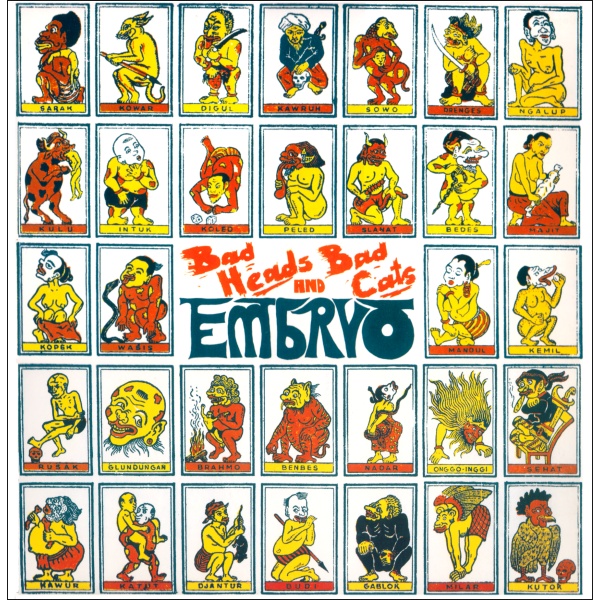 As far as Embryo albums go, Bad Heads and Bad Cats is one of the cornerstones of their career in the early to mid-70s, a turning point where the band was celebrating its new-found freedom from the dictates of major labels, with one of the strongest lineups in their history. From the 32 cards on the album cover that featured various Indonesian demons to their newfound propensity to include more jazz in their sound, everything now was a product of their own freedom as they moved from majors (Ohr, UA, Brain, and others) to their new cooperative independent label April (soon to be Schneeball) with several other artists including Missus Beastly, Ton Steine Scherben, Munju, and others. The lineup this time (keep in mind this 1976 release was recorded in the fall of 1975) included seven members: Christian Burchard, Embryo’s founder on drums, vibraphone, and marimba was joined by veteran guitarist and singer Roman Bunka, bassist Uve Müllrich, and sax and flute players Charlie Mariano and Edgar Hofmann, all of whom featured on the previous album Surfin’. Keyboard player Dieter Miekautsch, who had played with Embryo back in 1972 but left for Missus Beastly, was now back in the fold. New to Embryo was singer and percussionist Maria Archer, who had previously been with the funk band Red Point Orchestra. This seven-piece lineup was a perfect blend of ingredients, informed by great jazz players and a strong penchant for improvisation. The twelve minute standout, “Nina Kupenda” (a phrase from Swahili language), pulls its influences from East African sounds and rhythms mixed with an everpresent jazz idiom courtesy of Mariano and Hofmann, sharing a presence with Burchard’s vibraphone solos; the piece moves into a quiet phase in the middle, then comes back to life with a powerful groove, Archer adding some soulful vocals in the final two minutes. This song alone is worth the price of admission, but there’s a lot more, including the title track, peppered with great marimba moves underscored by Bunka’s wah guitar, with Archer’s voice singing the memorable refrain. Opener “Layed Back” is another funky one that serves as an introduction for all the players in a somewhat fusion setting, and sets the tone for the rest of the album. “Klondyke-Netti” begins with a powerful driving bass line from Müllrich, as the other players slowly join in for an extended jam that is among the album’s high points. Two bonus tracks are included: A seventeen minute extended workout “MHuman Contact” was taken from the same sessions as the album, while the five-minute “Sidetrack” is a live cut from the 1975 Vlotho-Winterburg Open Air Concert LP, the studio version of which was on the previous album Surfin’. All taken, Bad Heads and Bad Cats is an important milestone for Embryo along their journey.