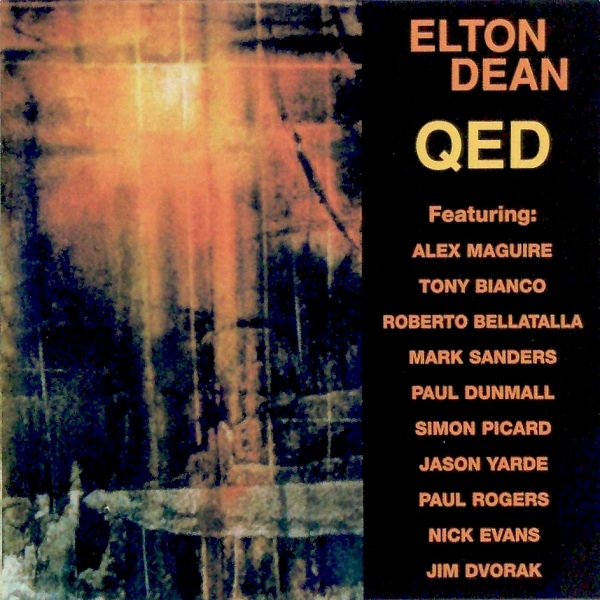 Elton Dean’s recent associations with Hammond organ specialist Alex Maguire (as heard on HUX’s excellent release Psychic Warrior) have been gradually building over time. QED is one of the first recording dates with Maguire and drummer Tony Bianco that capture a return of sorts to the inspired signpost of Dean’s Soft Machine days. This trio gets two cuts on the recording: the first song, “Hammond X” is informed by the ghost of Tony Williams Lifetime as Dean spends time on Fender Rhodes against Maguire’s pensive but effective tones. The trio’s other piece ends the disc, “New Roads” which is perhaps a bit more into Brian Auger territory but the trio are playing at breakneck speed to end the recording on a substantial high note. Maguire is retained on piano for two freer excursions with Roberto Bellatalla and Mark Sanders handling the rhythm duties. Their first performance, “Quartered,” is a loosely structured piece with Maguire comping against Sander’s loose tempo and Bellatalla’s adept anchoring. The latter piece, “Altored Saint,” is a saner improvisation with Dean and Maguire introducing an intuitive dialog before the upright bass enters with a few careful brush strokes on the snare. On “Sax.com” Dean is joined by three fellow sax men (Paul Dunmall, Simon Picard and Jason Yarde) for a somber English take on San Francisco’s Rova sax quartet. Jim Dvorak and Nick Evans join Dean and Sanders on the longest improv, “Deep Crease,” which is the definitive performance on the disc. In summary Dean has rarely delivered anything but high quality collaborations between various configurations across the years.