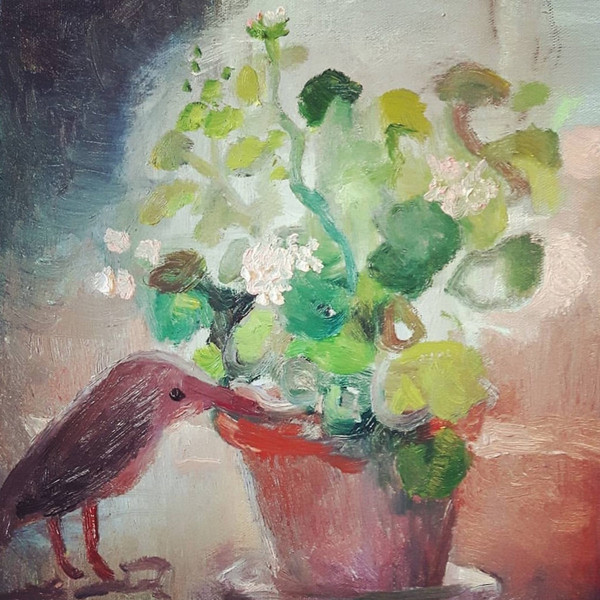 I had never heard of this Swedish duo of Peter Wikström and Emil Holmström before they were brought to my attention by Gayle Ellett (of Djam Karet and Fernwood), who has been involved with Ecovillage from the outset; they have four previous albums since 2009 on four different labels, and Sacred World is their fifth, again on a different label, this time released only on cassette or as a download. Wikström and Holmström have been working on various music projects together since 2001, but following a three month journey of discovery through Thailand, Laos, Cambodia, and Indonesia in 2006, they created Ecovillage, an experimental ambient world music group, taking a more spiritual path. The two principals play flutes, cello, synthesizer, electric piano, grand piano, acoustic guitars, percussion, sitar, samples, and various field recordings, and composed the six tracks here together, recording their parts in Umeå, Sweden. Gayle Ellet plays harnonium, dilruba, guitar, surmandal, 8-string tenor ukulele, udu, tanpura, wooden flutes, windchimes, ebow, and more field recordings, his parts recorded at his studio in Topanga, California. The mood throughout is very meditative, though the first few tracks are the most so, the opening title track is primarily looped cloudbursts of sound with what sounds like a zither (surmandal) and some synths, flutes and percussives just under the surface as the piece rolls onward with field recordings of birds chirping closes the proceedings. “Catch the Spirit” moves through a heavily processed cornucopia of sounds with wood flutes and percussives dominant, with occasional sounds of sitar and nylon string ukulele bubbling up through the surface creating simple, yet very effectve melodic patterns in the overall swirl of sound. Thus far I am reminded very much of Jade Warrior’s meditative album At Peace, and the third cut, “Journey into Now,” continues in that vein, presenting soft melodic sprites over a bed of glissando guitars and synth. The 21+ minute epic “Garden of Bliss” is like a lengthy journey through a number of different phases, with flutes, dilruba, percussion, and field recordings playing a major part throughout. The closer “For Artur” sports a powerful melody delivered on trumpet by guest player Erik Palmberg, over drifts of synth, dilriba and other heavily processed sounds shimmering underneath it all, closing the album with a gentle yet powerful touch.