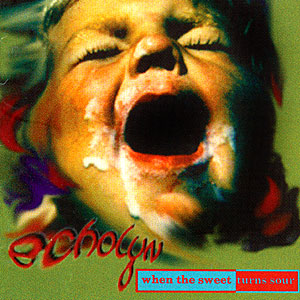 So one of the best American bands in ages has come and gone, rising unheard of from Philly and through the ranks of the Sony / Epic corporate record label, which sadly proved to be their last true album. What we are left with on this album are bits and scraps, home studio demos of five new songs, an acoustic version of "The Meaning and the Moment," a couple of live tracks, and the Genesis cover that never made it on the tribute album because Sony wouldn't allow it. Clearly, the new stuff is not entirely baked, but fans will not be disappointed. It carries on much in the same direction of As the World with a lot of jagged, complex melodies and lots of vocal interplay. While plenty of fans have had mixed opinions of the Genesis tune, this reviewer found it to be outstanding, despite being so overblown. The live tracks are a fitting testament to how awesome Echolyn were in concert. But no matter how hard you try, you won't be able to shake the disturbing feeling that comes from hearing these tunes, seeing these pictures, and realizing what has been lost. This is indeed a good collection of material, but also a self-pitying last gasp.