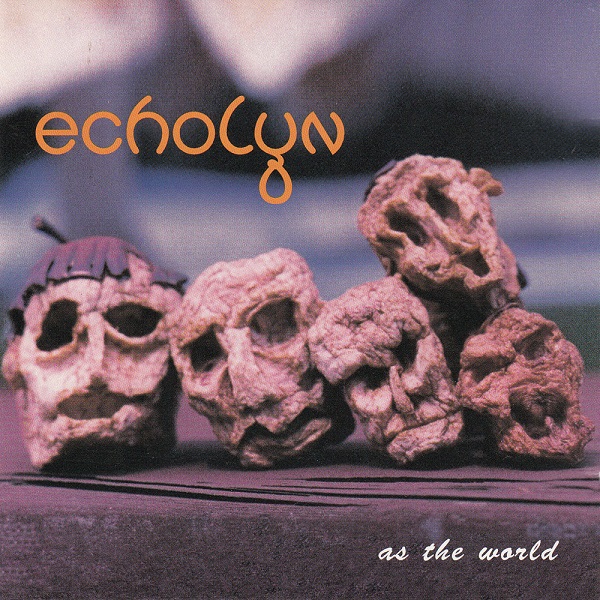 Echolyn seems to be intent on making a career walking the line between commercially acceptable album-oriented rock and something a bit more challenging. First off, As the World is much more vocally oriented than their previous releases. There are only two instrumental tracks, both of which are less than a minute long. Three-part vocal harmonies are present in most of the pieces. Combined with the standard verse-chorus structure that pervades these tracks, the vocals add to the saccharine-prettiness of the music. But then again, some of the three-part harmonies are quite difficult, with each vocalist singing different words, and all three trading off harmonies. The vocals themselves may turn some listeners off completely. While lead singer Ray Weston does have a very capable voice, it often sounds strained. Guitarist Brett Kull, who sings backup and lead, almost always sounds strained. While I cringe less at the vocals on this release than some of those on their eponymous debut and Suffocating the Bloom, there still are times I wish they were an instrumental band. Compositionally, we have another mixed bag. Some of the tracks, "As the World" and "The Wiblet" in particular, are quite complex texturally and harmonically (in fact, anyone who enjoys "The Wiblet" should try some Samla Mammas Manna or Magma). Others are very simple (i.e.: "One for the Show," "Settled Land," and "Never the Same") and add little to the album except for accessibility. On the other hand, the band does display a fair amount of versatility, which may endear them to some listeners. Within each track, even the weaker ones, there is usually a fairly interesting bridge or instrumental break. The true ability of Echolyn comes through in these moments. The lyrics are infected with the heavy-handed, preachy sophmoricism that plagues bands like Rush. The words are above-average rock-and-roll poetry, yet they can be touching in their naivety. Overall, this leads to (yup, you guessed it!) an inconsistent album. If I had been let into the editing room for As the World, it would have been about 40 minutes long, with fewer vocals. While Echolyn surpass commercial bands like Rush, Kansas, and Marillion in terms of musicality, they aren't quite up to the level of peak Yes or Gentle Giant. Given that at least one member of the band has been formally trained and is aware of the avant-garde, I hope the band is not afraid to dump their current formula at some point and to explore more Terra Incognita. As it stands, I am disappointed with As the World and enjoy Suffocating the Bloom much more, despite its rawness.