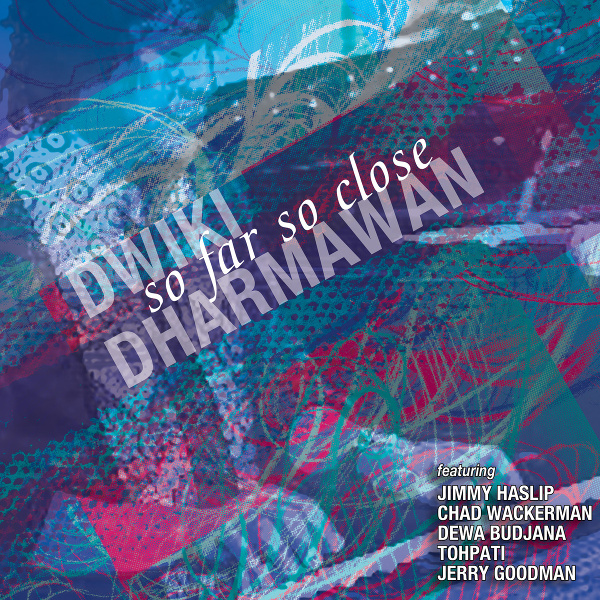 Moonjune is never short on surprises when it comes to introducing outstanding jazz-rock acts from Indonesia, and keyboardist and composer Dwiki Dharmawan is just the latest of many, with So Far So Close, his first international release. Already a star in his own country, he is well known as a solo artist, collaborator, and a member of his fusion band Krakatau for over 30 years with eight full length releases, as well as other projects like his World Peace Orchestra. Here, Dharmawan is teamed up with renowned jazz bassist Jimmy Haslip (who also played on Dharmawan’s previous release, 2014’s Live in USA), famed drummer Chad Wackerman, Indonesian guitarists Tohpati and Dewa Budjana, I Nyoman Windha playing an assortment of traditional Indonesian instruments and vocals on what is perhaps the album’s most adventurous track, the ten minute “Jembrana’s Fantasy,” and on the opening track “Arafura” none other than Jerry Goodman on electric violin. The bulk of the pieces here echo the golden age of fusion from the early 70s onward through the mid-80s, occasionally recalling greats like Herbie Hancock and Chick Corea, but with his own unique stamp which brings in elements of the traditional sounds of West Java and Bali. The second cut, “Bromo,” honors East Java’s most famous volcano with beautiful and memorable melodies and a sound that may remind some listeners of the jazzier tendencies of Japanese band Kenso. Other standouts include the gracefully melodic “Whale Dance,” the more hard edged and funky “NYC 2050,” where Budjana graces the proceedings with a sterling guitar solo, and the album’s closer, “The Return of Lamafa,” where the ancient and traditional take a tour through the modern idiom of classical-informed jazz. All taken, So Far So Close is proof positive that fusion is alive and well.

Legendary Pink Dots - Seconds Late for the Brighton Line – 2010 marks the 30th anniversary of this band as well as a major change to their lineup. Long time band member Niels van Hoorn departed because of the demands of constant touring, reducing the band to...  (2011) » Read more