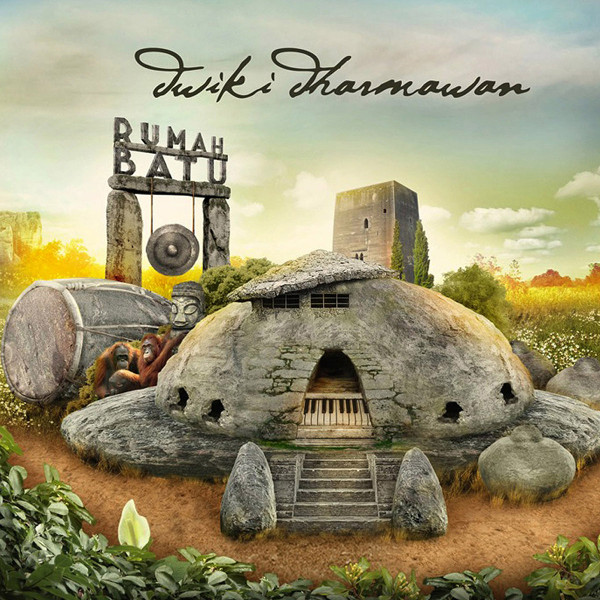 The moody eclecticism and ethnic richness that permeates all of Dharmawan’s latest release surprised even me, and I had marveled at those qualities in his previous release, Pasar Klewer from a couple years ago. An acomplished composer, pianist, and arranger who brings his best effort to the table along with an outstanding international group which includes French guitarist Nguyên Lé, Spanish bass guitarist Carles Benavent, upright bassist Yaron Stavi, and drummer Asaf Sirkis, both Israeli born, now based in the UK, plus a number of traditional guest players including Sa’at Syah on suling flute and vocals, Ade Rudiana playing kendang percussion; singer Dewi Gita’s beautiful voice highlights the third track “Impenan,” which she co-wrote with Dharmawan, plus several other guests on this track or another that altogether make for one magical jazz meets Indonesian traditional cornucopia of sound. The album’s centerpiece is the “Rumah Batu Suite” (stone house) in two parts for a total of nearly 27 minutes, the first part is an arrangement of the Sulawesi traditional “Kaili,” while the second part “Perjalanan” (meaning “Travels”) is a group-composed extension to the piece, with the fresh breath of improvisation permeating its fabric, starting softly and then morphing into a brisk free-jazz workout between the five main players, with Lé adding some wild elastic guitar soundscapes in the midsection, then a gentle group landing on the other side. “Janger” is another arrangement of a traditional Balinese piece, featuring a full compliment of traditional instrumentation (gamelan, suling (flute), kendang percussion, and more) that integrates seamlessly in a beautiful arrangement with its memorable melody shining through. The two opening tracks “Rintak Rebana” and “Paris Barantai” account for a full album side of Dharmawan-penned melodic jazz invention, where his piano is the guiding force setting the group on a forward path, moving through one idea after another, sometimes with a touch of funk or fusion, but always with an Indonesian cultural flavor thanks to the kendang perussion, suling, and vocals (on the latter track) that surface within the group’s crafty inclinations with regularity. “Samarkand” offers a memorable melody that warms the night as the group makes fire, and features much of the traditional instrumentation as well. Rumah Batu is a long album, approaching the 79 minute mark, but in this case that’s a big plus, as exciting moments are to be found around every new turn as the group proceeds along its path.