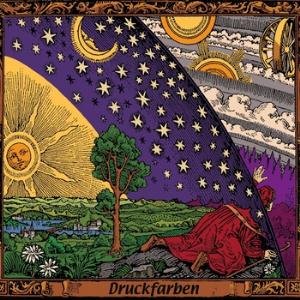 A five-piece from Toronto, Druckfarben uses the standard four-piece (gbkd) instrumental format with a dedicated lead singer. A couple other members also provide vocals, and guitarist Ed Bernard doubles on violin and mandolin, the latter making its appearance on the final track. It doesn't take more than about ten seconds into the opening instrumental cut to know this band is operating in solid progressive rock territory, and doing it with remarkable grandeur and accomplishment. Less than three minutes later when the next cut begins, the influences start to reveal themselves - Gentle Giant and Yes among them (the complexity of the former and vocal harmony style of the latter) with Bernard's rock-solid guitar chops a bit reminiscent of Steve Howe. Keyboard (favoring edgy Hammond-like sounds and piano over synths and symphonic keys) and guitar interplay is noteworthy throughout the album's nine cuts. The overall delivery tends to be harder, bolder and more vivid than the either of the aforementioned classic bands, although there are occasional moments of repose. Wisely, they steer completely clear of any prog-metal clichés. The writing and arrangements sparkle with brilliance, from the bottom end right up through the harmonies, with emphasis on strong melodies and driving power. A solid recommendation for fans of bands like Echolyn, there is a lot to like here for all fans of complex melodic prog.

Visitors - Visitors – The brainchild of producer Jean-Pierre Massiera, Visitors was his project "band," intended to be a one-shot affair and go no further. Massiera utilized an expanded lineup featuring several...  (1995) » Read more